How to Use Facebook’s Split Testing Options

If you’ve run a paid search PPC campaign before, you’re probably familiar with the idea of split testing ads. Split testing your ads is a great way to improve click-through rates on your ads and even increase the conversion rates of your landing pages.

After all, even the best advertisers don’t bat a thousand.

In this article, we’ll discuss why you should split test the delivery, placements and audiences you are using with your ads and how to set these tests up in Facebook. Let’s get started!

To put it simply, split testing is how we learn.

Take baseball, for example. If you’re in the batting cage practicing your swing and you swing too high to hit the ball, what are you going to do next time? Give up? Swing the exact same way again? 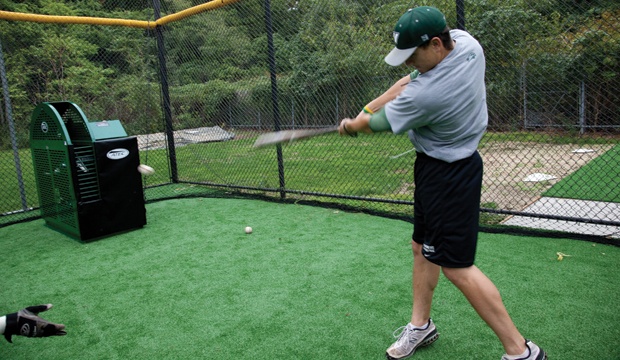 Of course not! You’re going to try something different. Maybe you’ll lower the bat a bit or swing faster to see if that produces better results.

Guess what? You just split tested your swing!

If your new swing connects, you know you’re doing something right. If you miss again, you’ll make another correction or two and see if that improves things.

The same idea applies to online advertising. Odds are, you won’t hit a home run with every Facebook ad or audience. But, if you don’t test different ads, placement, delivery or audiences, you’ll never figure out how knock it out of the park.

How to Set Up a Facebook Ad Split Test

To split test your Facebook Ads, open up Ads Manager and click “+ Create Campaign.” From there, pick the relevant objective for your ad campaign:

Now, pick the objective for your campaign…

…and check the box under Conversions to “Create Split Test”. 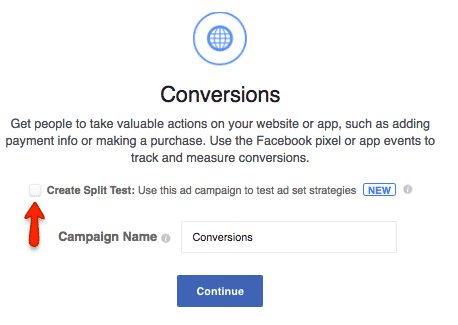 Type in a Campaign Name and hit “Continue”. You will then have the option to choose what you want to test: 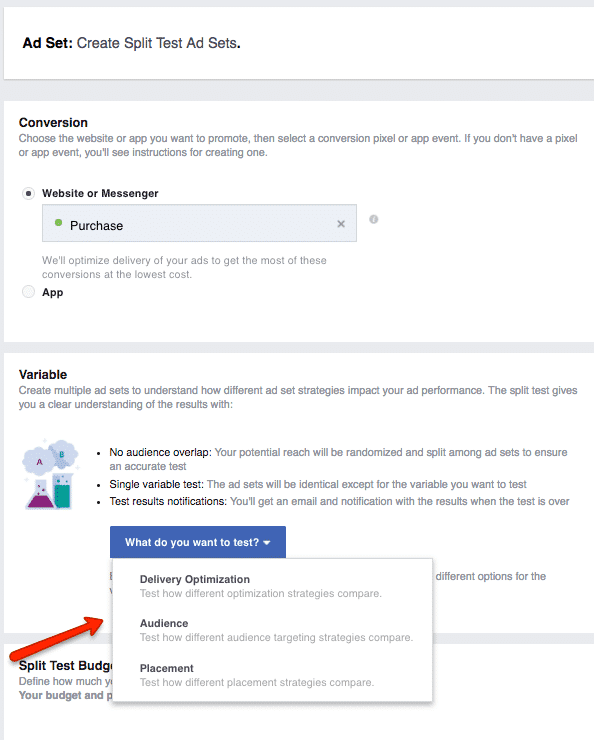 Pick the option you’re interested in split testing and Facebook will give you a set of relevant customization options to choose from.

If you choose to split test delivery optimization, you can test your ad delivery options and/or your bid amounts. 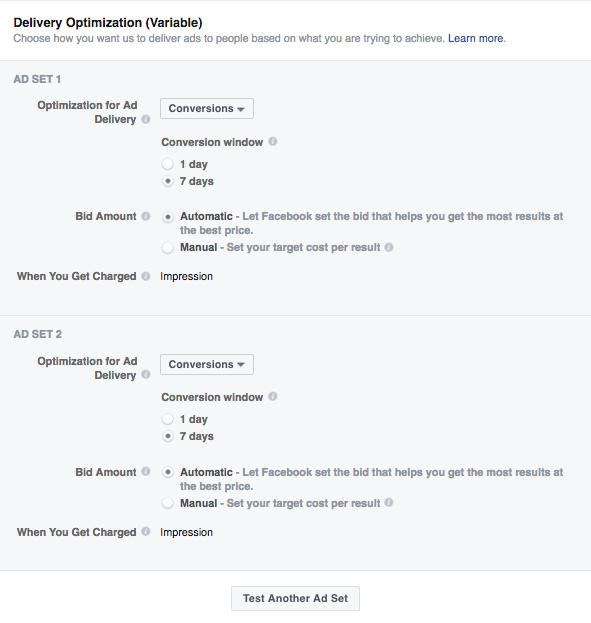 For example, you could try optimizing for “Link Clicks” instead of “Conversions” or compare different manual bids to see which delivery option produces the best results.

As a general rule, it’s best to only change one variable at a time. So, if you’re testing different CPM bids, you won’t want to simultaneously test impression-based delivery optimization against conversion-based optimization or you won’t know which change produced the better results!

With this option, you have the ability to directly test two different saved audiences against each other. 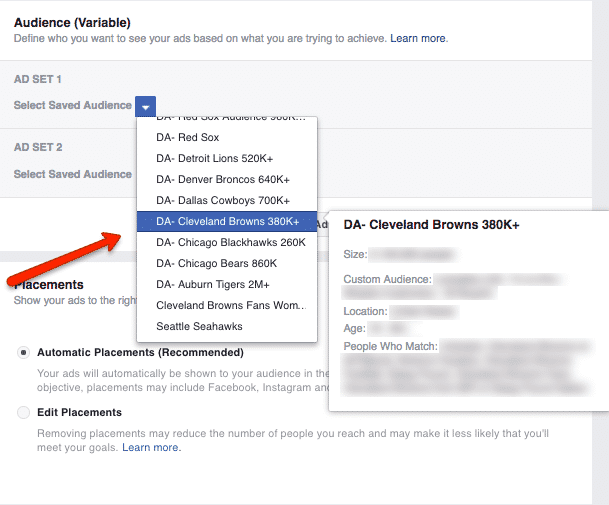 Since there was a good chance that your audiences had some overlap, the same people were potentially seeing the same ads from two campaigns. That made your results a lot less reliable.

With the new split testing option, Facebook keeps the audiences completely separate, which eliminates any potential of internal competition. As a result, you know that the winning audience really is a better target for your ads.

Facebook’s last split testing option allows you to compare different placements for your ads. For example, if you want to know whether or not your ads perform better in the feed or the right column, this is the setting for you.

Here are a few of the placement options you can test: 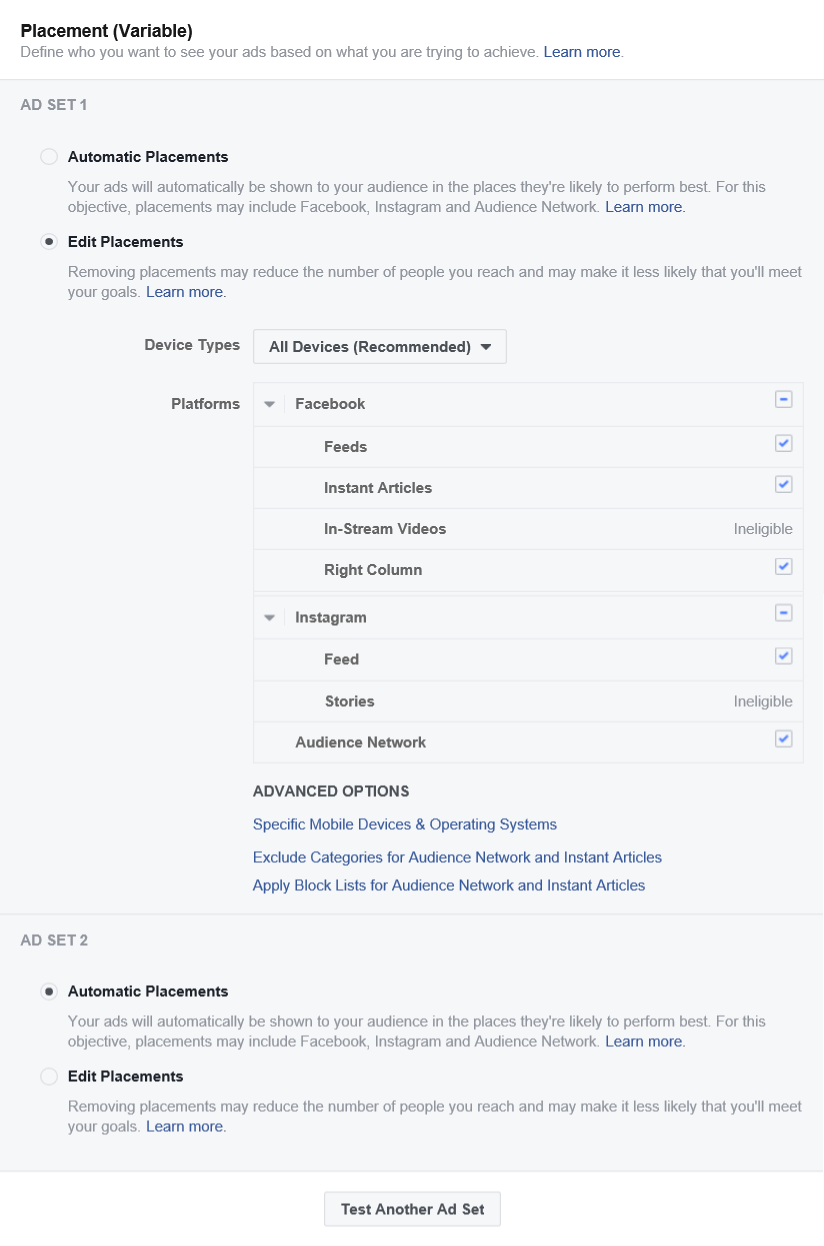 As you can see from this screenshot, you have a lot of potential options, so feel free to get creative! There’s a good chance that your best placements may not be immediately obvious, but with this test you can drill down on exactly where your ads should be showing.

Once you’ve decided what you want to test, all you have to do is finish creating your campaign! Depending on which testing option you’ve picked, you’ll need to complete the delivery options, placement and/or audiences sections.

From there, enter your budget in the “Split Test Budget & Schedule” section: 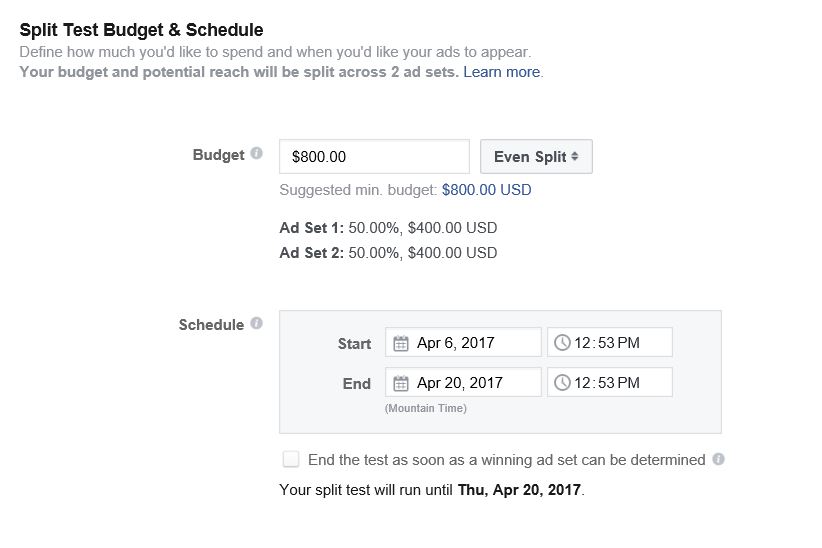 By default, Facebook will split your budget evenly between both tests, but you do have the option to push more budget towards one of your ad sets by clicking “Even Split” and changing it to “Weighted Split”.

Once you do, you’ll have the option to choose how much of your budget you want to spend on each ad set: 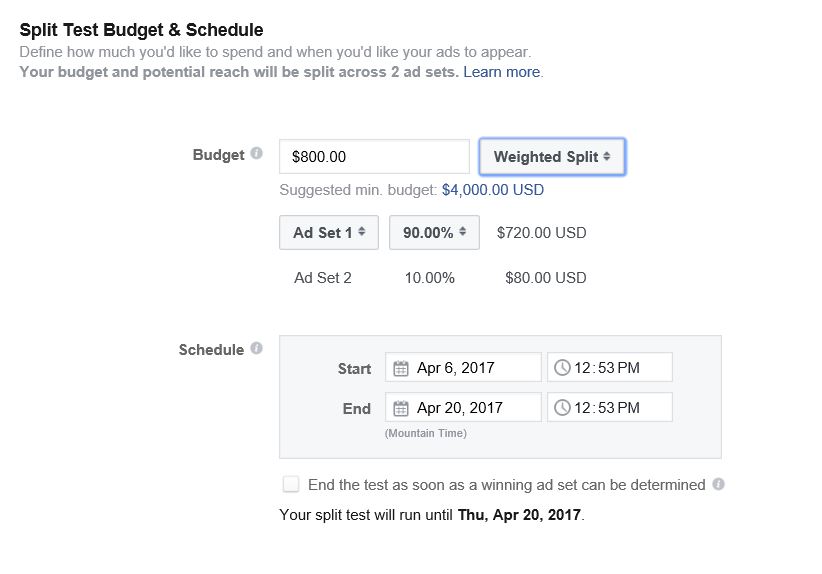 In general, I’d recommend the “Even Split” option, since it will usually give you the most accurate data, but there are times when you may want to use a weighted split.

Alternatively, if you are fairly sure that one of your placements will not perform well, you can give that placement 10-20% of your budget and avoid wasting money while still learning something.

Finally, you’ll need to tell Facebook how long to run your test. Facebook won’t let you run a test for less than 3 days or more than 14 days, so I recommend picking 14 days and checking the “End test as soon as a winning ad set can be determined” box.

Hit “Continue”, set up your ad creative and you are good to go! (for more information on how Facebook runs its split tests, click here)

With all of these new options, you may feel a bit at a loss about where to start. To help you out, here’s a list of testing questions to consider:

If you haven’t done much testing on Facebook Ads before, I’d start by testing your audiences.

Once you’ve identified your best performing audience(s), you can then use delivery optimization testing to figure out how to get the most out of those audiences.

You may find that different delivery setting deliver different results for different audiences. Those details will give you a great starting place for future campaigns with those audiences.

In addition, you can test a variety of placements for a given audience.

Simply answering all of these questions for 3 audiences could provide fodder for over 40 tests. Imagine what you could learn!

The more you know about your audience, what they respond to and how to target them, the more effective and affordable your Facebook Ad campaigns will be. Facebook’s new split testing option gives you a great way to learn what works and what doesn’t.

Incidentally, if you’d like some help implementing these new split tests or coming up with testing ideas, let me know here or in the comments. I’d love to help!

How do you feel about Facebook’s new split testing options? Do you think they will be useful?