That means you can change your ads from this: 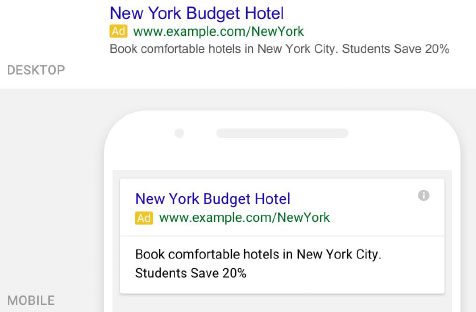 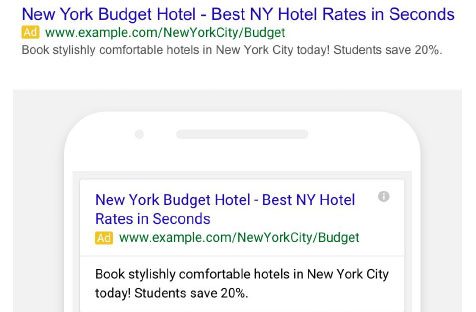 Obviously, this shift is also accompanied by a massive increase (47%) in allowed characters.

The question is, how will these bigger, longer text ads affect your AdWords advertising?

How are Text Ads Changing?

Essentially, Google has redesigned AdWords ads to create a consistent experience on both desktop and mobile.

We saw the first move towards this unified experience back in February, when Google removed the right side ads from desktop searches. Since the right side ads were the primary constraint on text ad size, eliminating them gave Google a lot more room to play with.

That means headlines have increased from 25 characters to 60 characters (140% bigger).

In addition, AdWords will now pull the domain from the final URL and give advertisers the option to include up to two 15-character paths that will be a part of their display URL.

Not surprisingly, these ads will display the same on desktop and mobile. However, the text will automatically wrap to fit the size of a searcher’s device.

When Will Standard Ads Go Away?

Advertisers are allowed to continue creating standard ads for the time being while they test and refine their Expanded Text Ad strategy.

Google hasn’t yet disclosed when it will stop showing standard ads, but it is likely that by the end of 2016, standard ads will no longer be displayed on Google.

With this timeline in mind, the question is, what do you need to do to make the most of this change?

Hypothetically, increasing your headline size from 25 to 60 characters and your overall ad copy from 95 to 140 characters should increase your clickthrough rate.

After all, the bigger your ad is, the easier it is to see.

So far, the data seems to agree. According to Google, some advertisers have seen up to 20% improvements in their clickthrough rates.

This hypothesis is supported by findings from other independent sources.

Wordstream reports that ads with Ad Extensions convert 12% better on mobile, although they don’t provide any substantiating data for their claim.

On average, their dynamically generated headlines had 36 characters, which is more than currently allowed, but still far less than Google’s new 60-character limit.

The main problem with applying the data from these studies to Expanded Text Ads is the fact that the data comes from Ad Extensions and Dynamic Search Ads.

Ad Extensions increase the size of your ads, so it seems logical to conclude that bigger ads may perform better. However, they also provide direct access to specific, often highly-relevant content, which could also explain the increase in clickthrough rate.

Along the same lines, Dynamic Search Ads give Google control over your keywords and ad copy, which means AdLucent’s DSA findings aren’t very representative of what you would see from a user-controlled paid search campaign.

Overall, these results seem to show a correlation between ad size and clickthrough rate, but they leave the door open for a lot of alternative explanations.

On the other hand, Google has had a rough version of Expanded Text Ads in play since 2011: Extended Headline Ads.

Now, the extended headline only applies when ads are in the top positions on Google, but for those ads, it effectively increases their character limit from 25 characters to 60 characters.

Essentially, with the Expanded Text Ads update, Google is making all headlines into extended headlines.

So, if your ads were previously ranking in the top spots on Google and you were using Extended Headline Ads, the biggest change will be the fact that you will now have an extra 45 characters to play with in your description.

For the last 5 years, Extended Headline Ads have been considered “best practice” for improving your clickthrough rate with top position ads. But does the data confirm this?

Here’s what he found:

This may explain Google’s statement, “Some advertisers have seen up to 20% improvements in clickthrough rates.”

Obviously, any change will benefit some advertisers and hurt others. The question is, how will Expanded Text Ads affect the average AdWords advertiser?

Why Bigger May Not Mean Better

There are several reasons why increasing the copy count may not significantly affect clickthrough rates.

It’s a rare breed of person who looks at a billboard and thinks, “Gee, I’m so glad that billboard is there.”

For high-commercial intent searches, people are looking to buy, so ads are a good thing. However, for this audience, it’s most important to be seen first.

Ad size is probably less important, since comparison shoppers will probably look at your competitors regardless of whether your ad has 95 characters or 140 characters.

For low-commercial intent searches, people don’t have much of an interest in clicking on an ad. In fact, only 6% of all searches result in a click on a paid search ad.

As a result, many searchers may see your bigger ad as just a bigger, more annoying obstacle between them and the result they are looking for.

Size Doesn’t Mean Much When Every Ad is Big

Making paid search ads bigger seems cool, until you realize that everyone else’s ads will be bigger, too. 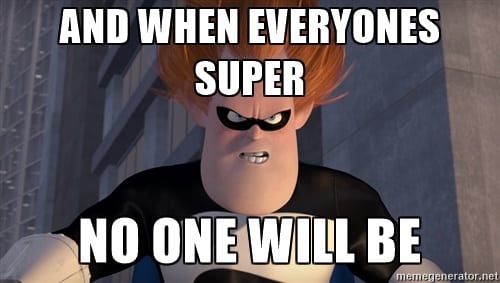 Yes, you can argue that bigger ads will make it harder to scroll past your ad, but that’s more an ad position argument than it is a size argument.

If you play it right, 45 extra characters may give you the room you need to win clicks.

However, more characters also means more opportunity to come of as confusing or irrelevant (even if your product is a good fit for their needs!).

Tighter content leaves more to the imagination and forces you to focus your ad copy on what matters most. Even with only 95 characters, there are still countless examples of hopelessly confusing copy out there.

As a result, this change will give great copywriters a way to get even more out of their ads.

For those copywriters who struggle to express themselves clearly in 95 characters, an extra 45 characters may give them even more room to confuse their audience.

As with any change, advertisers who are prepared to take advantage of this new opportunity will be able to outperform the competition.

To really seize the day, here are my top 3 recommendations.

The announcement of Expanded Text Ads comes with a lot of excitement. Even Google is calling it the “biggest change in 15 years.”

However, an extra 45 characters alone won’t positively impact your AdWords account—it’s what you do with those characters that matters.

If you’d like me to take a look at your account and give you some recommendations on how to best take advantage of this upcoming change, let me know here or in the comments. I’d love to help!

How do you think this change will affect your clickthrough rates? Is this a change for the better or is it just hype?