Harry Potter and the Importance of Google AdWords

Harry Potter has a fanbase that spans the entire world. From Dubai to Malaysia, from Beijing to New York, fans have followed it since the day of its publication in 1997.

Since that time, Harry Potter has gained a large, devoted fan base and has given birth to one of the largest franchises known to man.

But it wasn’t always a cakewalk for J.K. Rowling and the Harry Potter franchise.

In fact, J.K. Rowling and her daughter were living on benefits during the process of Harry Potter’s writing. Even J.K. Rowling said that she was rejected “loads” of times when attempting to sell her first copies. Rowling had to tweak her stories to create new ideas and theories so her ideas could be explained in an understandable, relatable way.

Just as the Harry Potter series had to be tweaked and changed to appeal to different audiences, you’ll have to do the same to your AdWords ad campaigns if you want to draw people to your company and products.

However, figuring out the right story takes work. J.K. Rowling talked to editors and readers and went through countless revisions during her creative process. With Google AdWords, the process can be even more complex, but if you use the right data, you can figure out what your audience wants and use that information to create truly compelling campaigns.

Google AdWords helps you track your conversions so that you will know what messaging works for your target audience.

Essentially, a conversion tells you what happens after a potential client clicks on your ad. How much time do they spend on your site? Do they make an attempt to purchase anything or learn about your company? Are you having success?

To answer those questions, we need to learn how to track conversions. In AdWords, click on Tools > Conversions. This will give you the option to start tracking conversions.

As you do this, AdWords will also generate a small code that you can place on your website which will tell you when someone has converted.

The following picture shows an example of the piece of code that will notify you when a conversion takes place.

Using this code to track conversions will help you understand who is responding to which messaging. Once you know that, you can use that information to improve your advertising efforts.

Now that you’re tracking conversions, it’s time to start monitoring which ad campaigns are actually bringing in the most conversions and—further down the road—the best “Return-on-Investment” (ROI).

ROI is the ultimate judge of campaign performance. You’ve invested in your company. What are you getting in return? Are the sacrifices you’re making worthwhile?

Now is the time to toss out the old ads which haven’t been receiving as many hits, based on the data that you will receive using AdWords. Audits from Disruptive Advertising have revealed that the average AdWords account wastes about 76% of its budget on the wrong keywords and search terms.

That means that you could be wasting money on all sorts of useless keywords. Let’s change that. Now, you may be wondering, “Well, what can I do? I can’t control what words people search and what words they don’t.”

That’s true, but you can run a Keywords or Search Terms Report on searches from the last few months. That way, you can see the words which your clients are (or are not) using to find your company.

To do this, you’ll need to create a specific filter for Conversions < 1.

This will create a detailed report of which ads have had very little impact on your conversion rate. That will help you to know how to further tailor your keywords to ensure that you’re actually targeting who you think you’re targeting.

In Disruptive’s audits, Disruptive found that 94% of the keywords used on the Keyword or Search Terms Report are unproductive. 100% of conversions and sales come from just 6% of keyword searches!

What happened to the 76% of wasted ad spending mentioned earlier? It’s paying for the clicks on your non-converting keywords. So, if you want to improve the performance of your AdWords campaigns, stop paying for clicks on keywords that don’t produce conversions!

Of course, simply bidding on the right keywords isn’t enough to guarantee you AdWords success. Now that you are tracking your success rates, you can finally make sure that you have everything in place to make your company something that will attract new clients. It’s time to take a look at your landing pages.

In order to understand the importance of having a good landing page, let’s imagine for a moment that you want to finally fulfill your lifelong dream of obtaining your airplane pilot certification.

After a brief search, you are presented with two advertisements:

Naturally, you would most likely click on the second ad that is shown in the picture above. It seems to be tailored more closely to your needs and it reflects your interests.

So let’s say that you clicked on the second ad and this was the landing page that you were taken to: 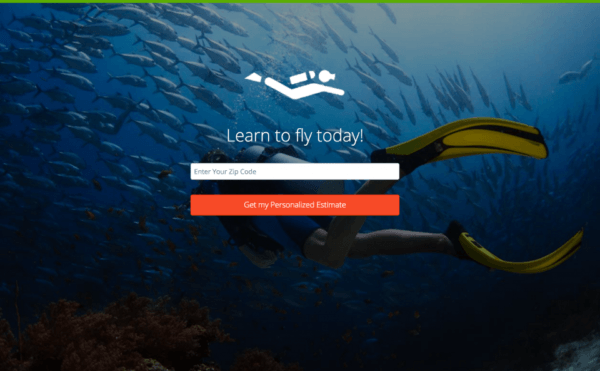 This landing page looks interesting, sure—you see a scuba diver, a school of fish and a coral reef—but it can be misleading. You are looking on getting your certification as a pilot, not as a scuba diver.

Odds are that you would think that you had clicked the wrong link and you would exit out of their page. That’s one more lost sale due to poor landing page design and money that they lost due to a click that would yield ultimately no results.

But, let’s say that instead of finding a scuba diver, you saw the picture below: 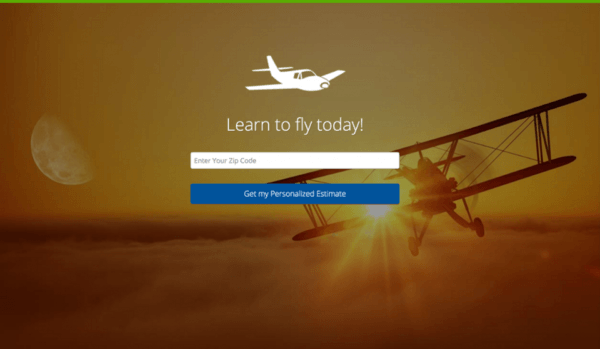 This landing page is much more convincing, right? Given the choice between the two landing pages, which one would you choose? The picture of the airplane, no questions asked.

In fact, according to Stanford University researchers, up to 75% of sales are lost due to poor initial website experiences. Not only is that a significant portion of your potential profit which is lost, but it also damages your credibility.

If your potential clients have a bad experience on your site, that will hurt your company.

If you set up a good landing page, then you can rest assured that your site will help to bring in the quadrupled conversions and sales mentioned earlier.

But one important question remains to be asked: How do you make sure your landing page is the best suited to your clients’ desires? The answer is simple: High quality A/B testing.

Step #4: Use A/B Testing and AdWords to Succeed

Just as J.K. Rowling has had to reach out to her fans and answer their questions, you’ll have to put in work and pay attention to what your clients like the most about your company’s marketing strategies, and make needed changes.

The way to do this is through A/B testing.

High quality A/B testing allows you create the perfect experience for your clients. You essentially create two separate websites. Although the clients are taken to one of the two websites you have made, you can monitor what they do and which page is yielding the most conversions.

Just like the landing pages above, A/B testing will show you which landing page is best for your company.

Couple Google AdWords with A/B testing for the most promising and honest results and make the changes needed for success. These simple steps will help you to start using Google AdWords to gain more conversions and make better use of your resources and ad campaign.

It won’t always be easy, but you will have success as you follow these simple steps. You may have a similar journey compared to what J.K. Rowling passed through, but you’ll see magical results in no time. Sure, it will take time, effort, critical thinking and a fair amount of planning and scrapping, but that’s completely acceptable when taking charge over your ad campaigns..