Preparing for Hulu’s Self-Service Ad Platform: How to Get Started Now

You’re probably already aware of Hulu, at least as a user. Hulu is one of the main forces in paid (aka legal) online video streaming. They offer both movies and television shows, and their biggest advantage is that they’ll allow you to watch shows that aired as recently as the night before.

For users who are taking advantage of their live streaming package, you can even watch shows or movies as they broadcast in real-time on participating channels.

If you’re familiar with Hulu, you’re almost certainly familiar with Hulu’s ads. Speaking from experience, even when you pay for the “commercial-free” plan, you’ll still get ads; some shows, including a few on ABC for example, don’t participate in the plan and require that an ad is shown before and after the episode (I don’t really think this should be a thing, but it is what it is). And if you’re watching live TV, Hulu’s ads will show up in place of the channel’s commercials during the natural commercial breaks.

Previously, advertising on Hulu was extremely limited, requiring you to work with a Hulu account manager directly. Soon, though, that’s getting shaken up, as Hulu is working on a self-service ad platform for their network, which is currently accepting Beta testers.

This new ad platform is fascinating, and if you think you can connect with your audience here, it only makes sense to start preparing for the rollout now! In this post, we’re going to go over everything you need to know about preparing for Hulu’s self-service ad platform and how you can get ready now.

What Exactly are Hulu Ads and are They Effective?

Hulu Ads are shown before, during, and even after content that users stream through Hulu unless they have the commercial-free plan. Even then, only qualifying shows are actually truly ever ad-free.

These ads are typically 7-, 15-, or 30-seconds long, and allow advertisers to show video ads to an engaged, essentially-captive audience waiting for their show to return. There’s no fast-forwarding, and since on-demand has dominated compared to traditional cable, these ads are essentially superior to television commercials in many cases.

Based on Hulu’s own research (which of course is at least a little biased), their ad platform can be outstandingly effective, especially in terms of brand awareness. They noted that advertisers saw significant lifts in ad awareness, message association and purchase intent, and that these lifts are rising year-over-year.

Hulu has plenty of data to back this up, including the following:

Hulu ads, therefore, have plenty of benefits and can clearly be effective.

Right now, Hulu Ads must be bought through Hulu directly. An account manager can approve and help you set up your campaigns (you can reach out to Hulu about this option directly here). 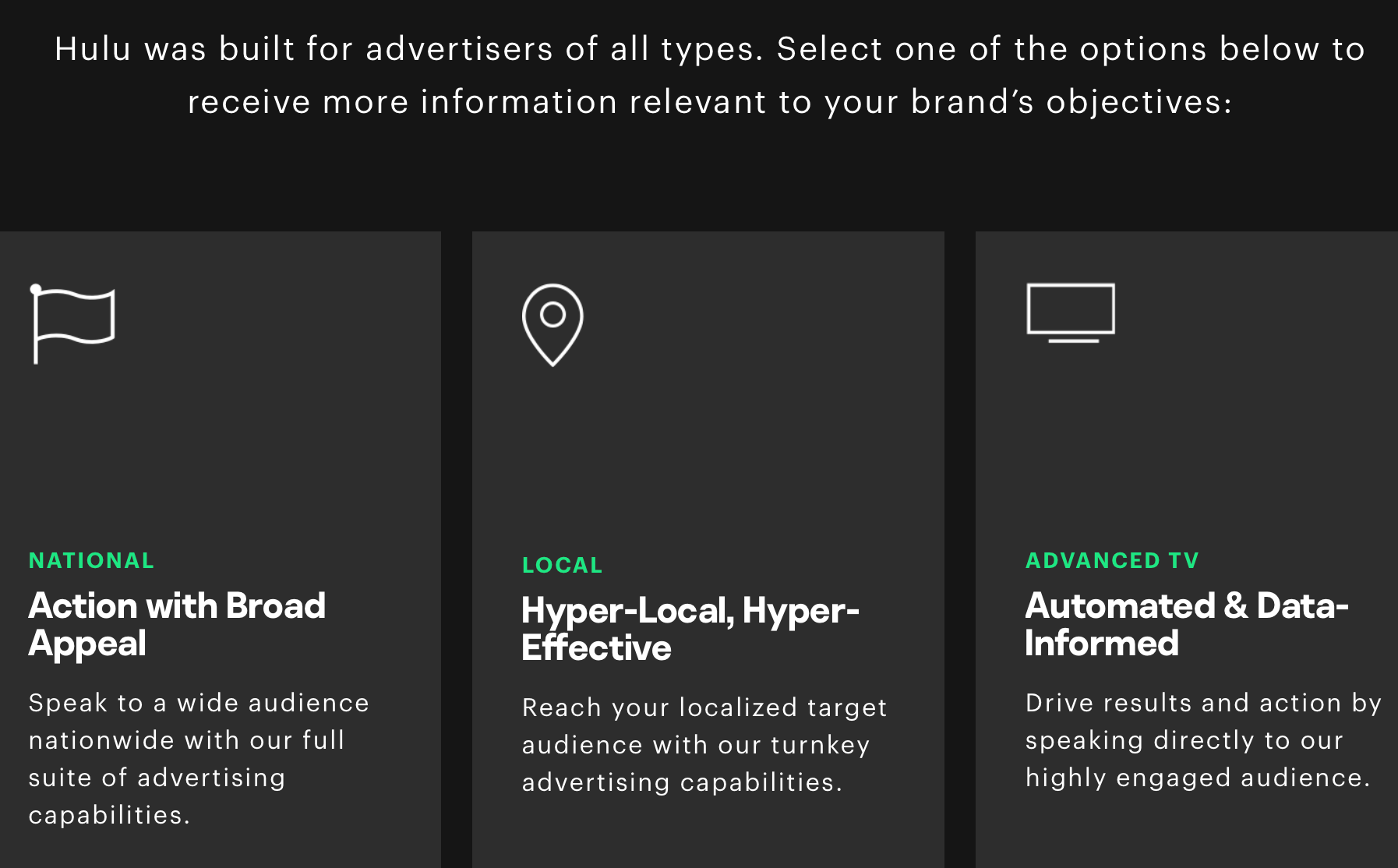 There are three options when it comes to Hulu ads:

All placements allows you to detail the specific demographics, interests, and behaviors that your target audience has. A dog food company, for example, would want to target dog owners or those watching dog competitions on the Animal Channel.

How Much Does Hulu Ads Cost?

Much to many people’s surprise, Hulu is more accessible overall as an ad platform than you might expect. Historically, rates have averaged around $30-40 per every thousand impressions, but recently it’s been closer to $20. This is likely due to an increase in usage and longer ad times, meaning they have more placements that are reducing the cost in the marketplace.

How Will the Hulu’s Self-Service Ad Platform Work?

Right now, you can RSVP to be one of the first members of beta test for Hulu’s self-service ad platform.

Self-service ad platforms, for those who are unfamiliar, are those that advertisers can manage themselves. They’re able to create their ad content, set up their campaigns and targeting, and submit it for approval. Think Facebook Ads or Google Ads—you actually create the campaigns and the creative, but it must abide by the platform’s terms of service, and you bid on placements. You can manage these campaigns yourself and assess the analytics data.

This is opposed to platforms like Snapchat’s original ad platform, which required brands to go through account managers to create and manage campaigns.

The ad approval process is estimated by Hulu to take approximately three days. Advertisers should expect this to take longer if it’s a peak marketing season, and know that your ad will be evaluated against Hulu’s ad policies.

What are Hulu’s Ad Policies?

Hulu’s ad policies are all pretty standard. You agree that you won’t hold Hulu liable if someone sues you over the content you promote there, and you’re required to pay for the advertisements at the agreed-upon price. They also require that the advertiser is legally able to run the ad campaigns. If you’ve got Usher’s “There Goes My Baby” in the background and you don’t have licensing for it, that won’t be good on any account.

In terms of content that you can’t run on the platform, here’s what you need to avoid:

How to Get Ready for Hulu’s Self-Service Ad Platform

Hulu’s self-service ad platform is closer than ever to rolling out, and personally, we’re excited. While you’re waiting to get started, anticipating your beta test approval (which you can sign up for here), let’s take a look at some of the steps you can take to get ready now.

Start with the Creatives

Each video ad that you upload will be its own unique campaign. You can set up different targeting for each campaign, so consider how you can use that to your advantage. A financing company might advertise student loans to those who are watching teen-heavy genres like shows on the CW, but advertise refinancing to those watching HGTV, for example.

Here are the technical details that you’ll need to know:

Think About Your Targeting

Unfortunately, you cannot choose a specific show for your ad to run on. An invoicing software with a target audience of entrepreneurs might want to try to have their ad run on a show like Shark Tank—but that’s just not an option right now.

You can, however, target by genre. Think genres like home improvement, reality TV, dramedies, and sports. There’s plenty of room to test out different campaigns targeting different genres and see what works best.

I am, for example, absolutely slammed with food-oriented and diet-focused ad campaigns when I’m watching shows like Top Chef on Hulu. Delivery companies are reminding me why I need six tacos for $5, and Noom immediately followed up with an ad to remind me why I don’t.

In addition to targeting by genre, you can ensure that the right people are seeing your ads by bolstering genre targeting with demographic targeting, location targeting, and interest and behavior targeting.

Your campaigns will be most successful if you’re creating your video ad with specific buyer personas in mind. Take some time to think about this and get strategizing before you even start shooting the video itself.

We know that right now, Hulu’s campaigns cost roughly $20 for every thousand views. That’s really not bad at all, and is easily accessible for many marketers if you’re looking at that alone.

Before you start the process, however, you’ll want to make sure you have the minimum ad spend required to advertise on Hulu. There is a minimum ad spend of $500. This is small potatoes for large corporations regularly dropping tens of thousands every month. Smaller businesses with tight budgets, however, may want to make sure that the platform is a potentially good fit before investing.

Keep in mind that Facebook’s cost per thousand views is somewhere around $11 on average, which is almost half the cost. Hulu does offer access to that captive audience in a high-quality format, and their advertisers have boasted plenty of success—the platform can clearly be worth it. Just make sure that you’re in a financial position to invest first!

Check Out the Competition

Ready to create rock-star level ad campaigns that your audience is drawn to?

Hulu is a different platform than your standard social media sites, and it’s different from YouTube, too. The content is more similar to television commercials than standard ad campaigns may be on other self-service platforms. Because of this, it’s good to do a little research.

Sit down in a free account, and watch shows your target audience might be watching. Watch for the commercials, and see what jumps out at you.

There’s an ad from the Calm app, for example, and it stops me in my tracks every time it comes on. It’s quiet, with nothing but the sound of rain, and it encourages the viewer through text to do nothing for the duration of the ad. It’s relaxing, and it’s a great advertisement for the app itself.

Assess the competition’s storytelling strategies, the length of the ads, and the impact the campaigns have. This is a great place to start.

Hulu’s ad platform is one that seems insanely inaccessible, but for brands who can afford a minimum of $500 in ad spend per month, it’s actually more accessible than you’d think. They also have plenty of advertisers who have seen some majorly great results, and there’s no reason that small, medium, and large businesses in a variety of industries can’t achieve those same results.

Though Hulu’s self-service ad platform is only in beta testing now, it never hurts to sign-up! You can start creating campaigns before the marketplace opens up to everyone, which could give you a competitive edge upfront.

Looking for help deciding which ad platforms to advertise on, or need help creating killer campaigns? That’s our specialty! Get in touch with us here to learn more about what we can do for you.

What do you think? Are you excited about Hulu’s self-service ad platform? Will you be signing up to join beta testers? Share your thoughts and questions in the comments section below!