So you want to make your own online video ads, eh?

You’ve got a great script, someone you want to act in it, and a vision for an ad you’re sure will rake in the revenue for your company!

There’s nothing left but to do it…which, of course, is where things start to get difficult.

Even if you have a good script that you are excited to film, there’s still quite a bit you’ll need to get in order before you get the cameras rolling.

If you’re filming your own commercials, you’re probably running a pretty tight budget, so this article will cover the bare bones of what you absolutely need to do in order to not hate yourself (and everyone else) by the time you’re done filming.

Before you can start filming that brilliant video ad you’ve envisioned, you need to put together a shot list. Of course, if you’re new to filming, you might be wondering, “What exactly is a shot list?”

When you’re filming, it is everything.

Basically, a shot list is a list of everything you need to get your shooting done, from the order you’ll be filming to any notes you might have.

Here are the basic things you need to have on your shot list.

You can leave some of these things off to save space, —say, you only have one actor—and you can add some in if they’re important (eg, you need special lighting for certain shots but not others). Still, most of that can be added into notes. It really depends on how you like it.

Why is a shot list important? Well, without it, post-production (editing and the like) will be horrible.

The scene number and shot number help your editor know the sequence your shots should be in so that what you have recorded matches the script in the end. This is critical because almost no videos are recorded with their shots in the same order they were in the script.

I would make a shot list like this on a spreadsheet (Google Sheets will work fine) and then sort it by location so that you can shoot your video in the most effective way possible.

On top of the shot list, you can make a shooting schedule. I like to combine the two and just put a schedule of the time it will take to shoot each shot as a column in my shot list. That way, you can see how much shooting you have left and know how far along you are all by looking at the same sheet.

When making a shooting schedule, be sure to account for time to set up the shot as well as get the right takes.

Once you have your shot list and shooting schedule together, you can worry about your storyboard.

When making any kind of film, it’s best to make a storyboard. It’s a basically a visual version of a shot list. Whether you get an actual artist to do it or you just draw some stick figures, it will help show what each shot will ultimately look like.

This is an important step because it allows you to double-check your shot list and make sure you’ve accounted for every shot you want in your ad.

Well drawn storyboards can be really useful to your camera operator because they indicate motion that will happen in that specific shot like so: 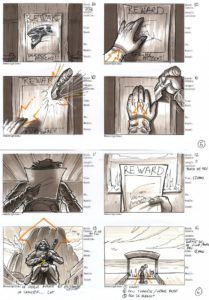 Having your shot list on post-it notes will let you put your storyboard together according to the script, and then move scenes around. This can be useful to do while making the shot list so that you can check and see if there are more shots you might want.

Either way, a storyboard will help you fully visualize what you are making before you actually go to shoot it.

When you have that together and the whole team is familiarized with it, you’re almost ready to shoot.

Having your shot list and storyboard together will help you know what sort of equipment you’ll need to make your vision a reality.

With these in hand, you can take your camera and know whether you’ll need a tripod, glide cam, or any other sort of stabilizing gear (like a slider, or a gimbal). 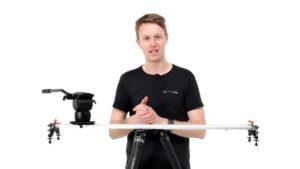 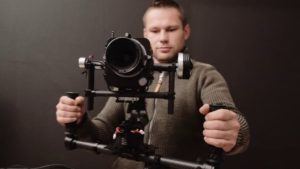 (Gimbals will give you smooth shots in any direction)

A look at your shot list and storyboard will help you see whether smooth panning is necessary for any of your shots. Put in the shot list which equipment you will need for each shot. You might be able to pull everything off with just a tripod, but tools like these (sliders and gimbals) can drastically improve the quality of your final product.

You’ll also be able to check which shots will require audio and whether it will need to be recorded on set. If it’s all voiceover you don’t need to worry about sound on set and you can do it later, but if there’s any kind of live dialogue, you’ll need audio recording equipment.

Your cell phone microphone might work to do some voiceover audio, but it really won’t sound as good as even plugging a lavalier mic into your phone. Believe me, I’ve tried.

When it comes to sound, more expensive options are almost always better, but I’ll go over that in more depth in an upcoming article.

Get whatever you might need for the shot, whether it’s a lavalier mic or a boom mic (or even both) and then be sure to sync your audio with the shot that you’re getting. This is where your shot list becomes most important.

It’s because of how things line up with that “Clapper” that everyone has seen, but has probably never really used: 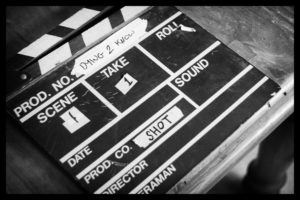 You’ll use this at the top of each shot to show which scene and take it is, and then the clap will give you somewhere to line up your audio (if you’re recording it externally, which you likely will be). This will make editing infinitely more simple. In the film world, this is referred to as a slate.

You’ll also need to consider lighting. Lighting makes the difference between a great video ad and a terrible one, so make sure you have the lighting you need to pull off your shots (the 3-point lighting system is always a good place to start).

I mean, you can make it work without lighting…if you don’t mind the people in your video looking like trolls.

Finally, remember, if something can go wrong, it generally will, so plan for that. Bring extra batteries, lights, nachos? Yeah…nachos (No, seriously, craft, as it is called in the business, is important. Even just chips and water will make things easier as you film).

Once you’ve got all this together, you’re ready to film your ad!

As you can see, putting together a high-quality video ad takes a lot of preparation (there’s a reason most businesses hire an agency or production company to do it for them).

But, if you take the time to get everything set up right, you can create an awesome video—even on a tight budget!

As you head off to start storyboarding, putting together your shot list and assembling your equipment, remember, the main goal in filming is to put together an authentic message that people will actually want to watch.

It’s better to have slight imperfections in a video that you can get out there than have a video that finally reaches perfection, but is two years too late.

By the way, if you’d like me to help you turn your video ad concept into a finished product, let me know here or in the comments! I’d love to help.

Anything I missed? Would you do things differently? How do you get ready to film your own video ads?