How to Scale Your Ad Campaigns with the Facebook Power Editor

We all know that PPC ads can have an enormous payoff and yield outstanding ROI. We also, unfortunately, know that the ad creation and management process can take up a huge amount of time. It can be exhausting enough to create a single ad, but then testing multiple variations or actually scaling your campaigns can be a little confusing at best, particularly on labor-intensive platforms like Facebook.

Plenty of small businesses and advertisers would typically turn first to Facebook’s Create-An-Ad tool, which is a more guided process of ad creation. Those who are accustomed to the ad platform, however, and ready to work quickly and at scale usually resorted to the Power Editor. And then last year, the two were combined into one Ads Manager, letting advertisers choose which creation process they wanted to use on one dashboard.

If you want to scale your ad campaigns, you need to get familiar with the Facebook Power Editor. It’s a must-have tool that will help you quickly create and manage your ad campaigns, whether you’re only running a few or if you’re managing 10,000 ads. And in this post, we’ll show you how.

Power Editor is now available through the Ads Manager. Advertisers can switch between “guided ad creation” that resembles the old create-an-ad system and “quick creation,” which is Power Editor.

The guided creation is great for advertisers or small brands using the platform for the first time, taking you through the creation process a little slower. Power Editor, on the other hand, moves more quickly, allowing you to create and manage a massive amount of ads in a shorter period of time. 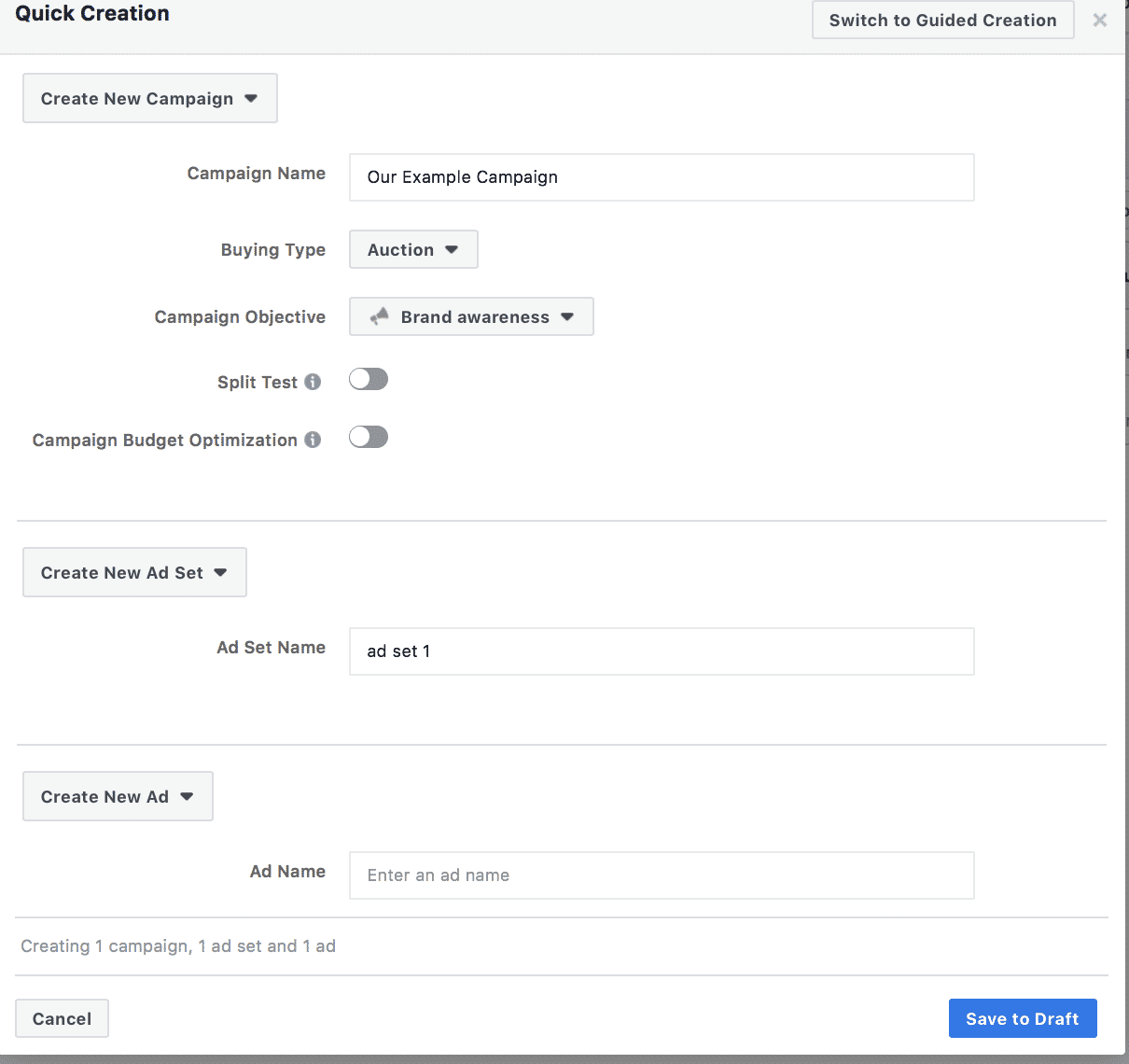 The Power Editor interface can take a little getting used to, but it’s much, much faster to use when you need to scale campaigns quickly and you just need to add in additional ad sets or ads to existing campaigns. Even having fewer screens loading can actually speed things up a lot. It gives you the functionality of Guided Creation at the convenience level of Boost Posts, but you get all the features you could possibly need.

If my clients are ever running their own ads and feeling overwhelmed with the ad system, I recommend that they start by creating one or two ads in the Guided Creation dashboard. Then, once they’re more comfortable, they should switch over to Power Editor to speed things up.

How to Create Ad Campaigns with the Facebook Power Editor

The only thing really different about Power Editor as opposed to the guided creation is going to be the interface. This wasn’t always the case. Power Editor was originally only available on the Google Chrome browser, and it had incredible capabilities that the standard ads manager just didn’t. Power Editor also typically got new features first, sometimes months before they’d show up in Ads Manager.

This is no longer the case.

Power Editor’s overall management dashboard has been folded into the conventional Ads Manager, giving us those useful ad filters and reports that you couldn’t get without heading to Google Chrome previously.

The learning curve, therefore, is relatively small here. But there is one more important thing to understand before diving into ad creation, and that’s Facebook’s ad structure. 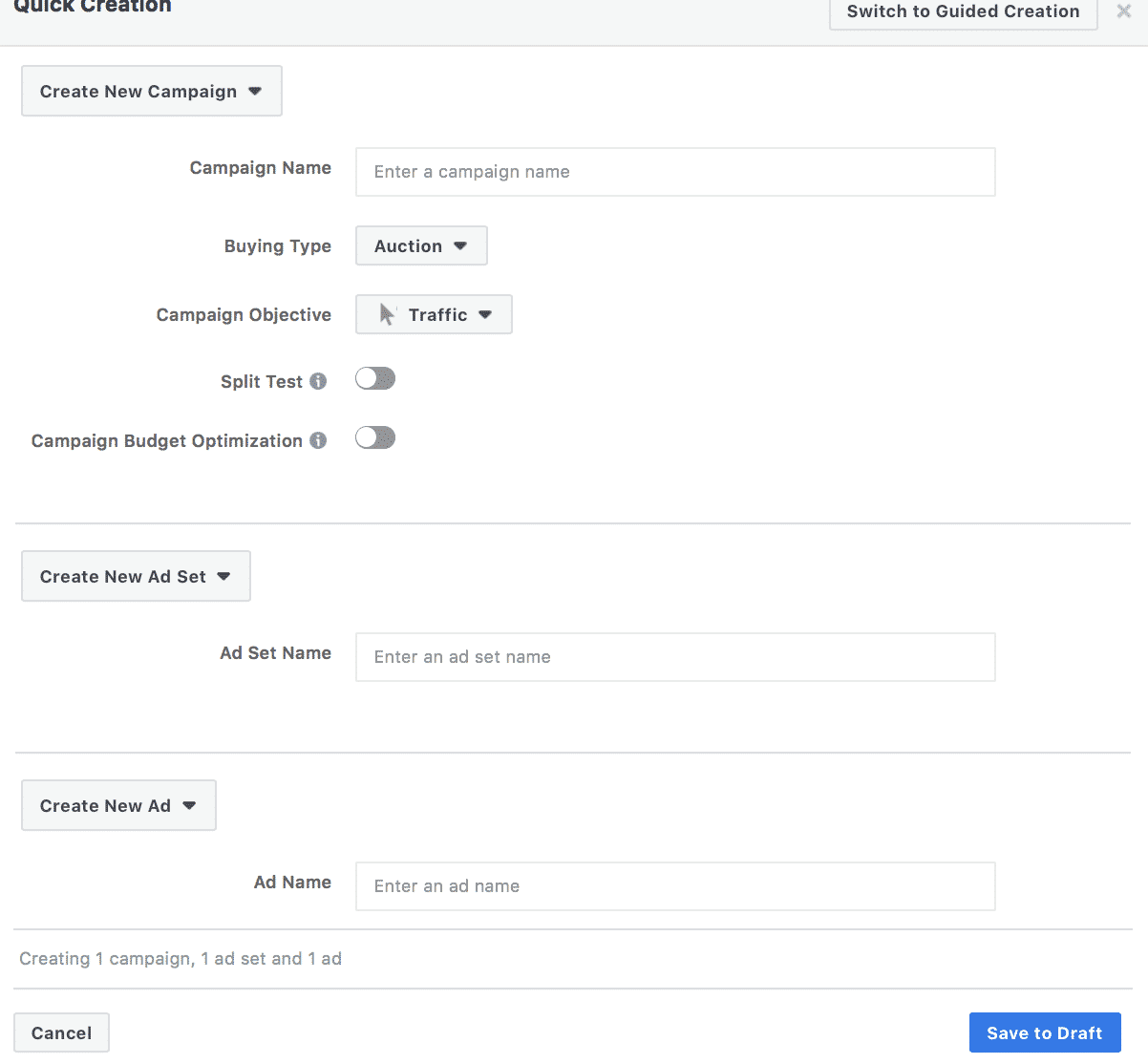 Once you’re familiar with this, it’s easier to create organized campaigns that you can keep track of and manage well.

When creating new ads in Quick Creation, you can use established campaigns and ad sets, or you can start completely from scratch. In this example, we’ll start straight from the beginning, new campaign and all.

At the campaign level, decide what objective to target. You need to name your campaign, and I recommend getting specific so it’s easy to find later on. You can also decide if you want to split test campaigns (which will allow you to test a single variable like creative, audience, or optimization) and if you want to have a total campaign budget. Note that split testing is not available if budget optimization has been enabled. 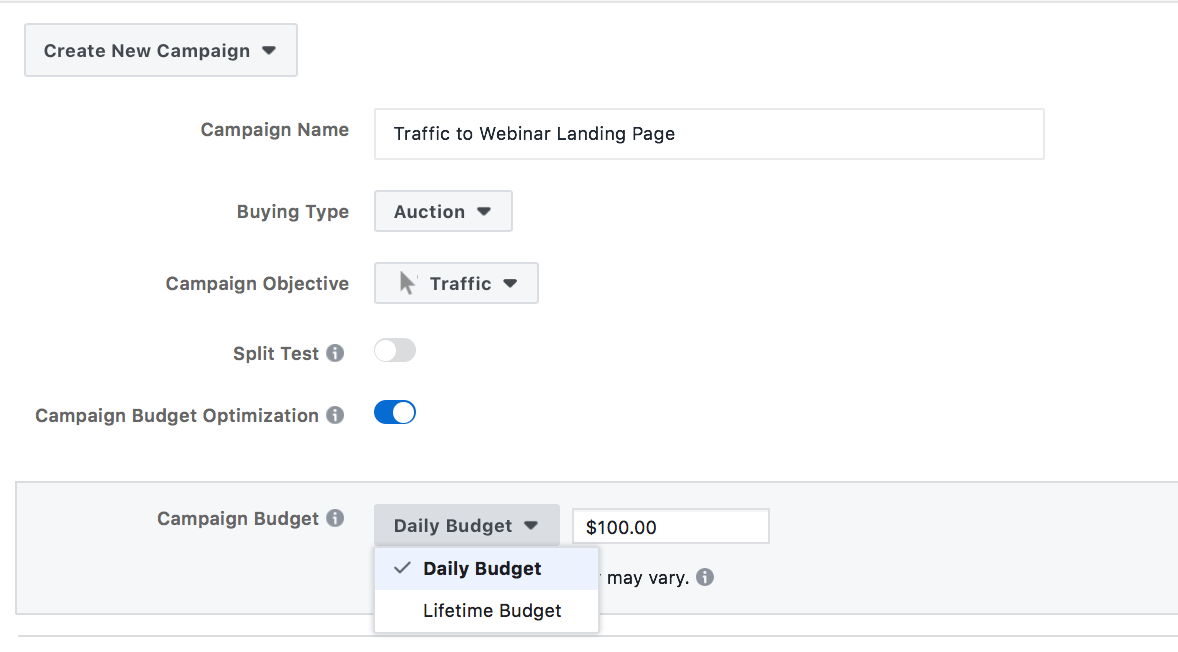 If you do choose to split test, you’ll be asked what you want to test. Testing only one factor will keep the experiments more reliable to show you how each is affecting your campaigns.

Next, you’ll be asked to name your Ad Set. You can choose whether or not you want to name an ad, and the next step is to hit “Save to Draft.”

This will open up the ad set in a new window for further customization, where you’ll choose your audience, decide where you want to send the traffic (for the traffic objective anyways), establish a schedule, and select your placements. 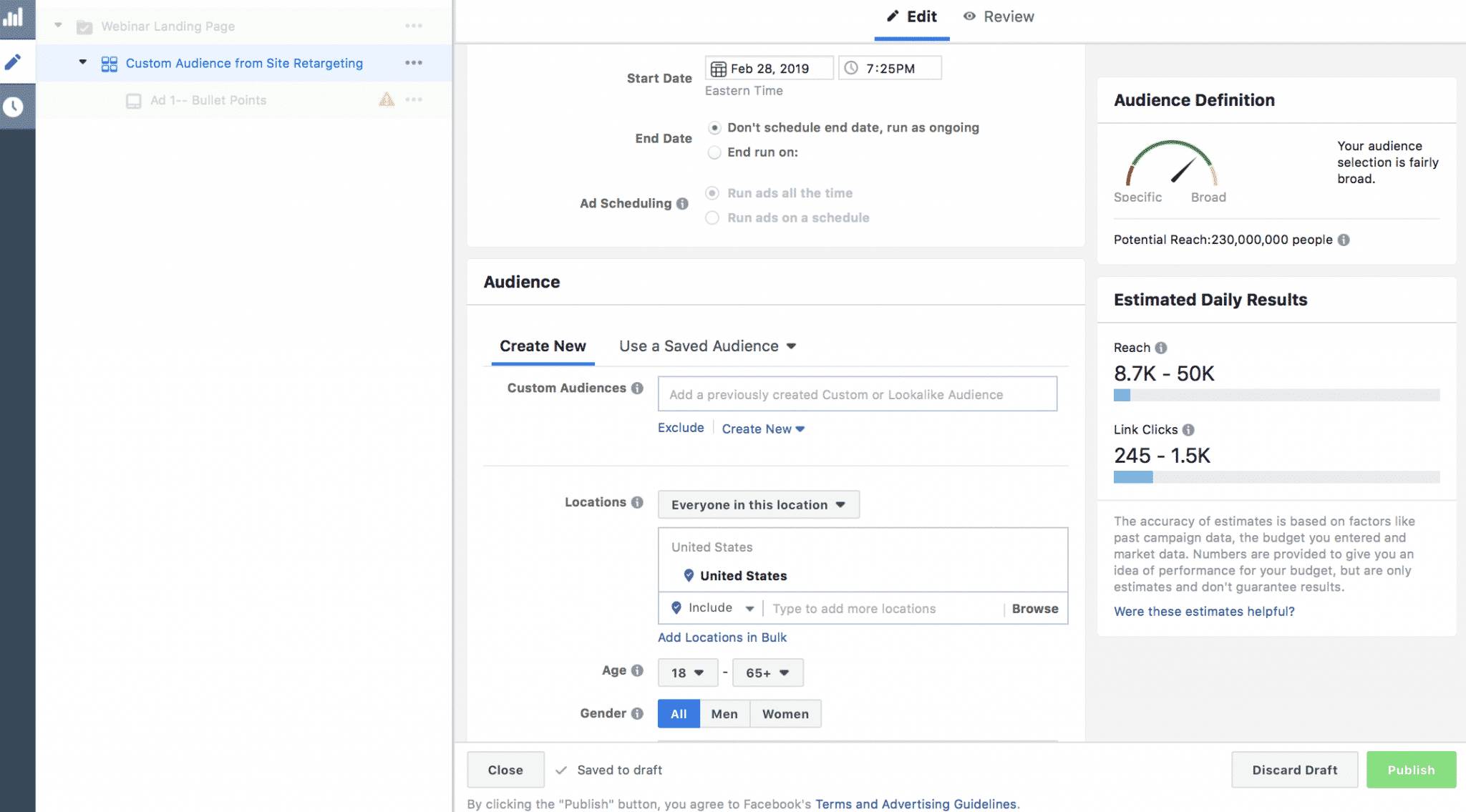 Once you’re happy with your ad set, go on to the ad level and start creating. You’ll choose your ad format, the image(s) or video(s) you want to use, select your CTA, and complete the copy. Make sure that you preview how your copy and visual components look on each individual ad placement to ensure nothing essential has been cropped out.

Once you hit “publish,” your campaigns and ads will be sent for review. You can edit, add to them, delete them, or duplicate them at any time.

Facebook’s quick creation option—which is essentially Power Editor under a new name—is the right choice for all advertisers and businesses who really want to be managing more than about 10 campaigns per month. If you’re spending more than $600 per month on ad campaigns, trust me when I say you’ll save a lot of time if you switch to this faster, more streamlined platform.

Can you imagine creating 120 ad campaigns per month manually through the guided creation system, using three different screens to do so?

Speaking as someone who did so once, I can assure you that this is something you definitely want to avoid, and that the small time investment it takes to adjust to the new system if you haven’t yet is totally worth the time saved overall.

Ready to scale your Facebook ad campaigns and take them to the next level? We can help you get results. Send us a message and see what we can do for you.

What do you think? Do you use Facebook’s Power Editor, Guided Creation, or a third-party tool instead? Which do you prefer and why? Share your thoughts and questions in the comments below—we can’t wait to read them!