How to Create the Most Effective Ad Groups for Google AdWords

If you could make your Google AdWords campaigns more effective, would you do it? Of course you would! At least, I would certainly hope you would.

The good news is, you can!

There are a lot of factors that go into how effective your Google AdWords campaigns are. Most people focus on optimizing their bidding strategy, keywords and quality score, but those aren’t the only parts of your campaigns that matter.

Ad groups are just as important as any of those other components and if your ad groups aren’t set up right, you’ll never get anywhere with your campaigns—at least not anywhere you want to go.

In this post, we’re going to define Google AdWords ad groups, explain why they’re important and show you how to create high-converting, effective ad groups.

Before we dive head-first into ad groups, we need to take a look at how Google AdWords campaigns are structured. 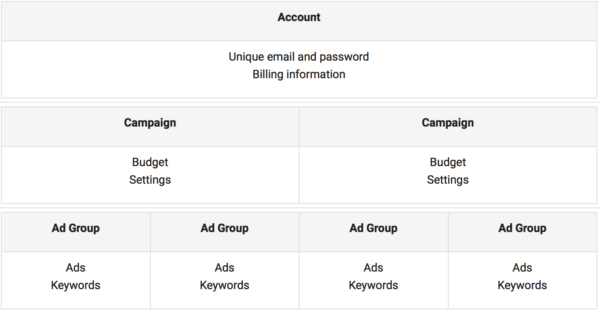 Under the AdWords account, you can create different campaigns. At the campaign level, you’ll establish budget and settings (like what type of placement you want to optimize for, etc).

What are Ad Groups?

Now, as the third branch in the AdWords hierarchy, you might be inclined to argue that your ad groups structure is a lot less important than your campaign or account structure…

However, I’d actually argue the opposite. You start making more decisions and becoming more specific as you move further and further down the hierarchy and when it comes to ad campaigns, the devil is in the details (but in a good way).

Ad groups contain your keywords, the messaging for your ad and the landing pages users will be sent to when clicking on the individual ad. Because of this, Google pays exceptionally close attention your ad groups when deciding which searches your ad will appear in, and how relevant your ad is to specific users.

If you don’t get your ad group created just right, your ads won’t rank as well, your clicks will be more expensive and you’ll miss out on a lot of potential impressions and clicks. Since Google is judging quality, a poor ad group could also mean that your ad won’t perform well on its own merit because it may not be targeted or relevant enough to the people seeing it.

Long story short: effective ad groups will get you more placements in AdWords and more clicks from customers.

The whole point of ad groups is to help you structure your ad campaigns in a way that maximizes the effectiveness and profitability of your ads. To do that, your ad groups need to be focused on hyper-specific keywords and audiences.

You should create ad groups where the keyword groups, ad text and landing pages all match each other closely. It’s almost never a good idea to try to appeal to your entire audience in a single ad group.

Let’s say, hypothetically, that you offer home remodeling services. You offer flooring, painting, home repairs, outdoor landscaping, room additions and complete remodels. Someone looking for a painter may not be interested in landscaping or home repairs, so including ads for those services in an ad group focused on painting keywords would make it hard to run effective ads.

Now, I’ll be honest, it takes a lot more work to create hyper-targeted ad groups than it does to just throw your whole advertising strategy into one ad group and hope for the best. But trust me, putting together quality ad groups is worth the effort.

Let’s take a look at what you see when you search for a life coach in the Orlando area: 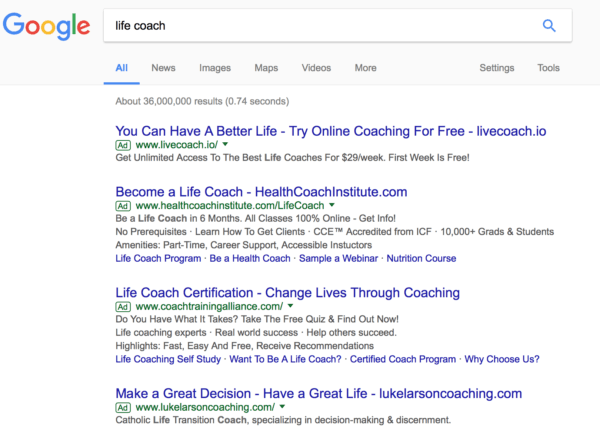 The ad results match the search, but they’re a little all over the place. There are ads for online life coaching, which could technically appeal to everyone, though many people prefer to work with someone in-person. There’s also Catholic life transition coaching, which is highly specific and likely will not appeal to the majority of people seeing the ad (which means they may be paying for irrelevant placements). There’s also two different ads for becoming a life coach, which is entirely off the mark of what we’re hypothetically looking for.

Maybe several days later, after you’ve researched what you want in a life coach, you’re finally ready to pick one. Or maybe, in an effort to get better results than last time, you decide to try a most specific search. Either way, you search for “life coaches Orlando”:

Look at that! The second result shows “Orlando Life Coaches”, advertising a way to find a coach in your specific area. When you click on it, you get the highly targeted landing page below: 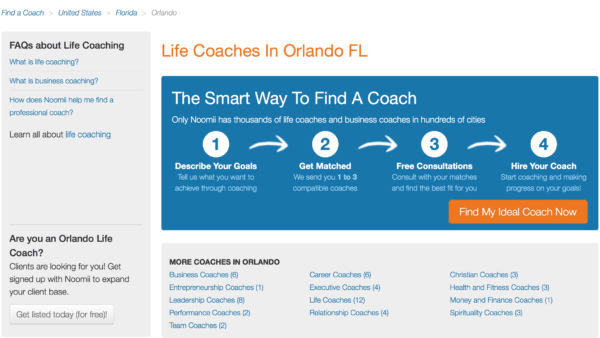 Once again, this looks like a good match for what we wanted: a way to find a life coach in Orlando. How did the advertiser achieve such good targeting? Odds are, they use location- and keyword-specific ad groups to ensure that they are delivering the right ads and landing pages on the right searches. Ad groups for the win!

Google looks incredibly closely at your ad groups when they’re deciding who sees your ad and when. By creating specific, focused ad groups (even if it means making a lot more of them), you’ll be able to create significantly more effective ad groups. This will help your campaigns both immediately and long-term by showing highly targeted messaging to specific niches of people, giving them exactly what they’re actively searching for.

What do you think? How do you create effective ad groups? Which strategies have yielded the best results for you? Let us know what you think in the comments below!