The End of Keyword Match Types?

Earlier today, Google dropped the latest in a series of announcements that have fundamentally changed paid search advertising: phrase match and broad match modifier keywords will now include close variants of your keywords.

But what does this mean for you and your business? Let’s take a look.

Since the beginning, paid search has been a keyword-focused PPC platform. As a business, you try to figure out what sorts of words people use to search online for what you’re selling and use those keywords to target potential customers with relevant ads.

In practice, it can be incredibly hard to figure out which keywords you should be targeting—and which ones are a waste of time and money. In fact, in our audits of Google Ads accounts, we found that only 6% of keywords actually produce conversions and sales. The rest are just advertisers’ best guesses as to how people will find them online—guesses that are ultimately wrong.

But fortunately, to help us improve the performance of our keywords, Google has given us keyword match types. With keyword match types, we can decide exactly how closely we want an online search to match our keywords. This will become important in a minute, so let’s take a moment to review the three basic match types (broad, phrase and exact) and how they work.

With broad match keywords, Google treats your keywords a bit like the pirate code—as a general guideline for the searches you want to appear in. If you enter the keyword “chew toy,” your ad could be shown to people searching for everything from “no-stuffing chew toy for dogs” to a teething ring for babies.

We’re not kidding—we’ve actually seen that range of ads before.

As another example, let’s say you live in Florida and want to go back to school to become a nurse practitioner. You don’t want to move or take courses online, so you search for “local nurse practitioner program.”

Only one of the ads that pops up actually offers a local program—the rest are all online. Google theoretically could have caught this since you entered “local” as a search term, but because most of these ads were likely using broad match keywords, so you saw multiple ads that don’t really match your search intent.

And that’s the problem with broad match.

Fortunately, you can control the range of queries that broad match keywords apply to by using broad match modifier keywords. Essentially, by putting a “+” sign in front of keywords, you can tell Google that you only want your ads to show up for searches that include words that are very similar to your keyword.

Broad match effectively multiplies the effective reach of your campaigns—which can be a good thing if you’re looking for an “automatic” way to increase search volume—but you need to keep a close eye on your search terms report to make sure that you aren’t wasting money on irrelevant searches.

Phrase match guarantees that your ad will only be shown if users search for specific keyword phrases as you’ve entered them into your campaign. 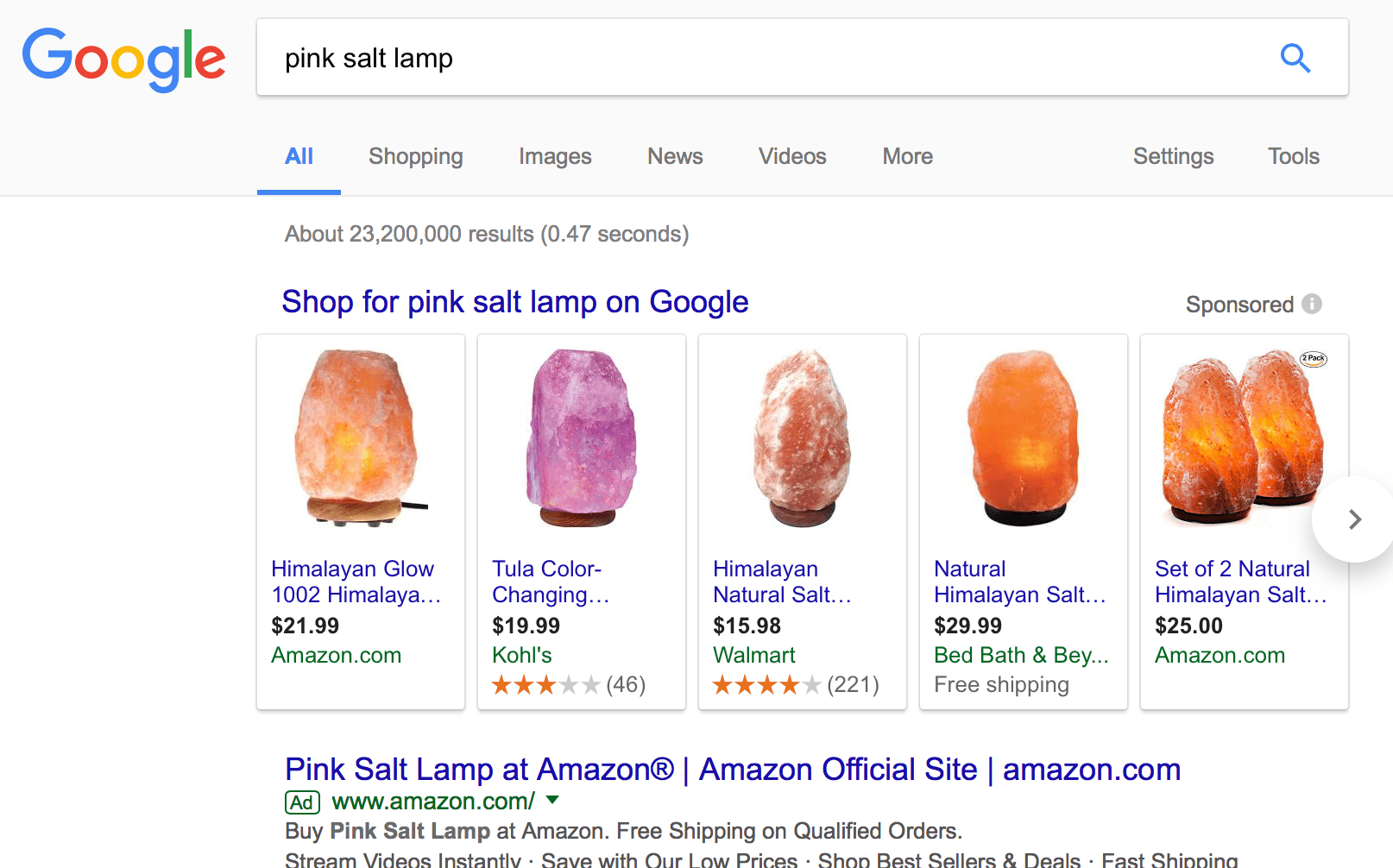 Traditionally, phrase match keywords will only be shown if users enter in the phrases exactly with no words in between, though additional words can be added before or after the keyword.

For the keyword “pink salt lamp”, for example, you may appear in searches like:

Phrase match keywords allow your ads to show up for a lot fewer types of search queries than broad match keywords do, which is great for helping advertisers focus their ad copy on just a few relevant searches.

With exact match keywords, your ad will only be displayed when searchers type in your exact keyword or an exceptionally close variant. So, if you bid on the keyword [pink salt lamp], your ad will only show up for people who enter in that exact phrase.

Historically, exact match has always given advertisers the tightest control over which searches their ads appear on. However, if you don’t include all of the right exact match keywords in your campaigns, you can miss out on valuable search queries, which is why many advertisers like to use exact match in combination with other match types.

As you can see above, each of these match types provides advertisers with a different way to control who sees their ads. This is important because the better you know who is seeing your ads, the more targeted and effective your ad copy and landing pages will be.

Unfortunately, Google’s announcement today has the potential to unbalance this whole system. Now, instead of only showing your ads based on your keywords, Google is taking your fate into their own hands. By including close variants of your keywords as part of their targeting algorithm, Google is basically saying, “Trust us, we’ll get your ads in front of the right audience.”

How Did We Get Here?

To be honest, this announcement really isn’t that big of a surprise. Given Google’s various moves in this direction over the past few years, it’s been pretty obvious that Google has been headed in this direction for a while.

In fact, in its crudest form, close variants were initially introduced clear back in 2014 when Google began allowing exact match keywords to match things like accidental plurals and misspellings. Then, a couple of years ago, Google coined the term “close variants” and expanded their definition to include queries with additional function words or out-of-order words, like the following:

Generally speaking, while these changes caused a few minor headaches, they were generally fairly helpful. With the release of close variants for exact match keywords, you could choose a keyword like [washington dc tours] and still show up a variety of relevant searches like:

But then, about a year ago, Google threw everyone for a loop when they further expanded the definition of close variants to include same-meaning words. Now, the exact match keyword [yosemite camping] could triggers ads for searches like “yosemite campground” and “camping in yosemite.”

According to Google, the main motivation behind this change was to save advertisers time and help them reach a broader pool of customers. That’s great, but we already had a couple of ways to do that—broad match modifier and phrase match—so the move was confusing, to say the least.

With all of these changes, it’s been pretty clear that Google is trying to make paid search advertising easier and more accessible, so this latest move is hardly surprising. However, close variants have definitely caused some real headaches for some advertisers—especially when small variations that seemed irrelevant to Google were actually big intent signals for their business—so expanding them into more match types does give cause for concern.

In the past, because they only affected exact match keywords, close variants were fairly limited in scope. As a result, they didn’t significantly affect most of us. This time, however, by throwing phrase match and broad match modifier into the picture, things could be very different.

What All of This Means for You

So, what does all of this mean for you and your business? Well, as you have probably guessed from the rest of this article, you can expect to see some changes in what search queries your ads show up for.

In the coming weeks, search queries will begin to match to close variants of your keywords. As a result, you can expect your ads to show up for more words with similar meanings: synonyms, paraphrases, etc.

As a quick example, here is the level of keyword range expansion you can expect from phrase match keywords:

You see the same sort of thing with broad match modifier:

Here, Google has picked “grass cutting and gardening” and “cut your grass” as synonyms for “lawn mowing”. If you don’t happen to offer gardening services, that could lead to some real problems.

To make matters worse, what if you happen to be bidding on both “lawn mowing services” and “gardening services”? What then?

Google assures us that they’ll take all of that into account and prioritize the semantically relevant keyword (along with its relevant ad), but if that’s the case, why roll out this change at all?

To be honest, it seems like this move is primarily aimed at simplifying Google Ads for new users. For established advertisers, it potentially creates as many problems as it solves.

With all that in mind, you’ll want to keep a close eye on your account over the next few months. Hopefully, since Google reports that 15% of all searches are new queries, you’ll discover a variety of new keywords. But, if that doesn’t pan out (and based on our audit findings, there’s a good chance that it won’t), you’ll need to manually corral your keywords using your negative keyword lists to keep your campaigns on track.

When it comes to online advertising, change is the name of the game. We’re all kind of at the mercy of big platforms like Google and Facebook, so when a big change like this is announced, there’s not much you can do but watch, wait and adapt.

Fortunately, as dependent as we are on the whims of Google for our advertising success, they’re dependent on us, too. So, every time Google makes a big change like this, it’s either for the better…or they’ll have to fix it fast.

All that being said, this new announcement does feel something like an execution notice for keyword match types. It might not be the final blow, but the writing’s on the wall. The lines between match types are getting very blurry now and it probably won’t be too much longer before Google asks you to identify your target keywords and leave the rest up to them.

By the way, if you’d like help adapting your campaigns to this new change, let us know here or in the comments. We’d love to help!

How do you feel about this most recent announcement? Do you think it’s a step in the right direction…or a step backward? How do you think this will affect your campaigns? Leave your thoughts in the comments!