We’re a data-driven agency, which means that when we’re running your ad campaigns, we’re all about the numbers. We want to see how your ads are performing, and we look at all the metrics.

Not all metrics, however, should be given the same weight, and it’s hard for new advertisers to know exactly which metrics should be given more attention than others. As a result, plenty of people end up focusing on vanity metrics that look impressive but that are either irrelevant or misleading in terms of the success of the campaign.

It’s incredibly important to look at conversion rates, costs, relevance scores, and click-through rates on Facebook Ads. These are all showing how well your ads are performing and for what cost, and they tell you how well your ads are performing. In order to get these results, however, you can increase the success and profitability of their campaigns is to increase reach without falling prey to ad fatigue.

In this post, we’re going to look at exactly how you can increase reach while keeping ad fatigue at bay and why this is so, so important. This will be key to creating thriving campaigns—no matter what specific goals you’re optimizing for—so let’s dive in.

Why You Should Focus on Reach Instead of Impressions

Seeing a large number of impressions on your ad campaigns can seem impressive at first. The thought of getting thousands of impressions for $15 sounds incredible at a first glance, but this is a metric that can be misleading.

Impressions only tell you how often an ad was seen. Reach, on the other hand, tells you exactly how many unique, individual users saw your ad. If your ad is viewed 1,000 times, for example, you’ll have 1,000 impressions, even if it was only seen by 300 different people (which is your reach).

Impressions can be an important piece of the puzzle, but reach is really what you want to focus on. You want as many people to see your ads as possible because 1) it puts more people into your funnel and 2) high impressions and low frequency means that the same people are seeing your ads over and over, which is the last thing that you want. If your impressions are high and your reach is low, it means that your message isn’t getting out there as much as you’d probably like. And, it means that ad fatigue will be setting in ASAP.

Ad Fatigue: Why It Matters

Ad fatigue is something that’s pretty much unique to display ads, and it can be a death trap for otherwise exceptional campaigns.

Think of it this way: If you see an ad campaign for a great new pair of shoes, you might think “those look great.” A second time, you might click even if you didn’t the first. Even the third time can still yield clicks or conversions, because the more familiar we get with a brand, the more likely we are to convert.

But let’s get realistic. If you see the same ad five times, are you ever going to convert, even if it caught your interest the first time? No.

You recognize it, and it’s now blended in with the rest of the Facebook newsfeed. It’s not interesting anymore. If you saw another ad with a new offer or a new product, that could easily change, but seeing this particular ad over and over again does nothing for you as a consumer.

This is ad fatigue, and why it’s so frustrating. When a customer sees the same campaign multiple times (which is evaluated by a campaign’s “frequency” metric), they’ll interact less and less. Impressions creep up, you may be paying for them, and clicks and conversions start to fall while peoples stop paying attention altogether.

This isn’t what you want, and it’s why you need to maximize reach without letting the ad fatigue set in. It goes without saying that this can be a little tricky, but the right strategies can help.

6 Ways to Increase Facebook Ad Exposure Without the Ad Fatigue

If you want to give your Facebook Ads a fighting chance, finding ways to increase exposure via reach without getting dragged down by ad fatigue is the way to go. There are 6 specific tactics you can use to ensure that this is the case, and keep in mind that the smaller your audience is, the more important these tips become.

1. Start With the Reach Objective

When you’re first running ad campaigns and trying to connect with a cold audience, the “Reach” objective in Facebook Ads is typically a good one. This objective prioritizes showing your ad to the most people possible, not just getting the most impressions possible.

It’s so important to cast as wide of a net as possible when it comes to initial brand awareness campaigns. The last thing you want is to have the same few hundred people seeing your ad (and paying for it) and risk missing hundreds of others who may also be interested in what you’re doing. While later on in the funnel you’ll want to use campaign-specific objectives like lead generation or conversions, this is a good one to choose upfront.

Niching down on your Facebook Ads is a great choice. While you’d like your audience size to be as large as possible (because it means there are more people you can reach, and less of a chance of ad fatigue), you don’t want it to be so large that you can’t deliver relevant ad messaging anymore.

The best thing you can do is strike a balance between the two. Consider how you could create an ad campaign that really resonates with a niche of your audience, and then target as many of them as possible with that campaign. You can then move on and do the same for your other audience segments, too. 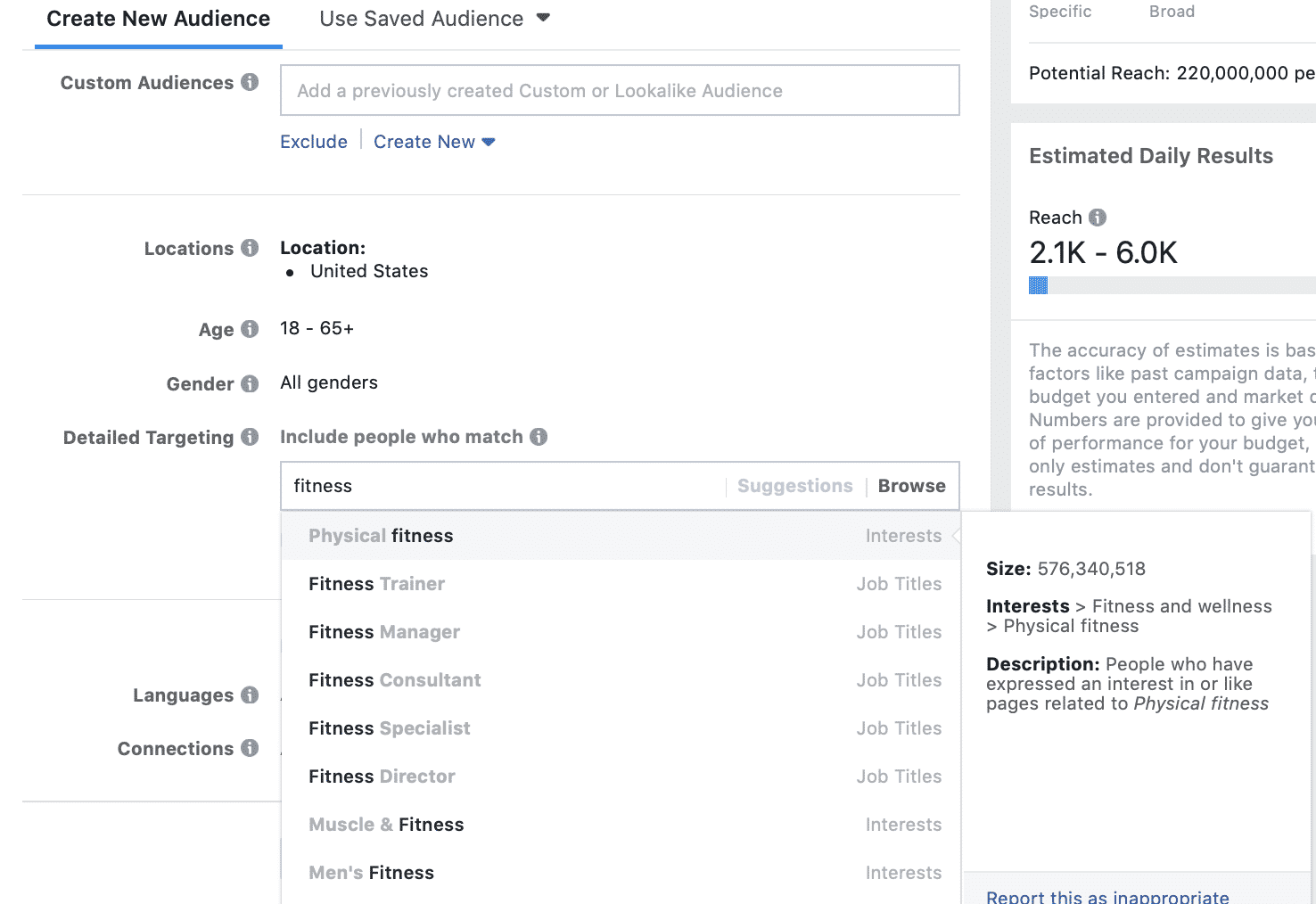 If you were starting up a gym, for example, you’d run a very different campaign when targeting fitness specialists to join as contracted personal trainers than you would when trying to target people who are casually interested in working out to join the gym.

The audience groups will get smaller (but not too small!), but you’ll have more relevant ads that will be able to move them effectively through the funnel. This can actually cut down on ad fatigue just because you’re showing hyper-relevant ads while reaching bigger chunks of the right audience members.

3. Put a Cap on Frequency

One easy-as-pie way to cut down on ad fatigue is to literally put a cap on the frequency metric. This determines how often a single user can see the same ad within a set period of time, and it’s exceptionally useful. 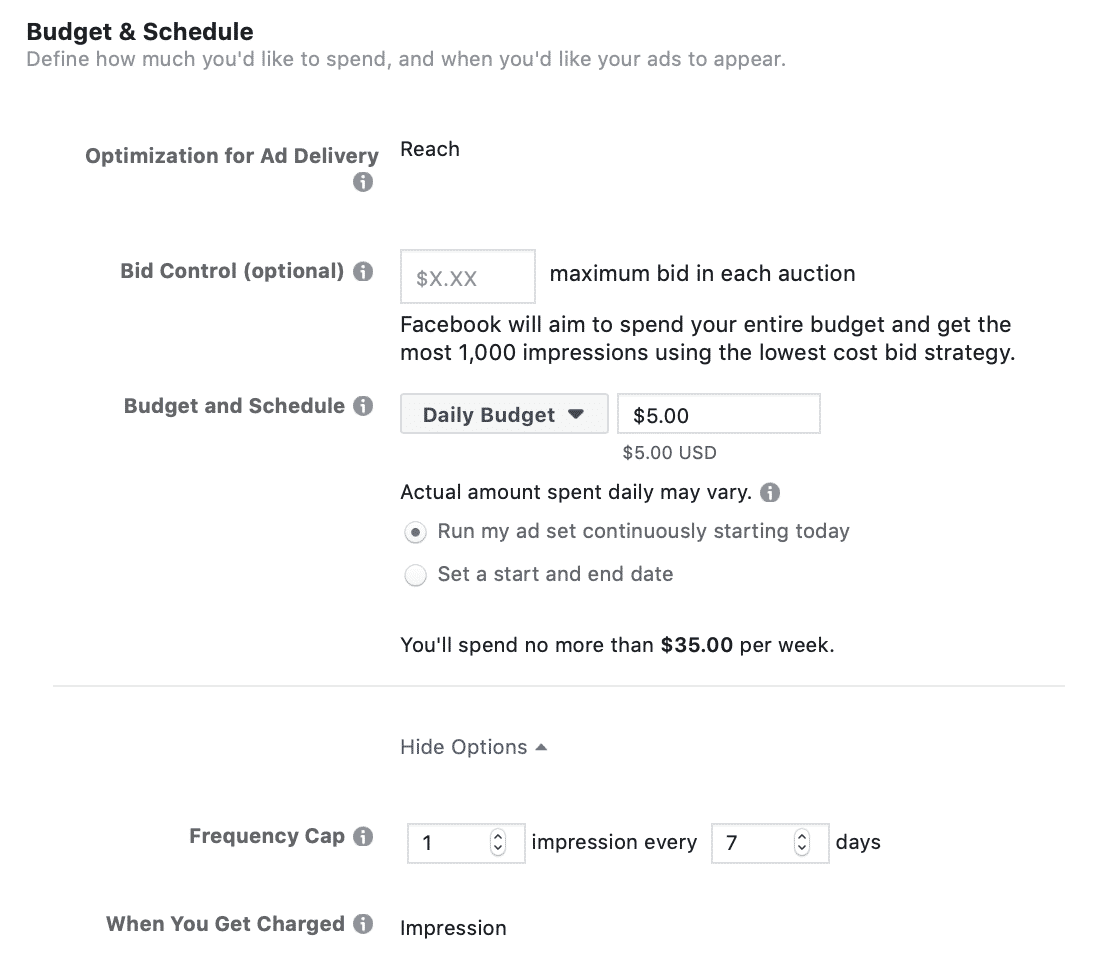 This can be found under the budget and schedule section with the more advanced options. Allowing a single impression or even two impressions over a set period of time is an excellent choice, because it ensures that people aren’t seeing the same ad, wasting your impressions and building up a resistance to your ad campaigns as a whole.

In the past, I’ve done one impression every ten days or two impressions every fourteen days, depending on what the offer was.

4. Move Users Through the Funnel

In an ideal world, people would just see a single ad, realize your product/service/offer is exactly what they need, and buy immediately. That would be excellent, right?

Unfortunately, that’s not how things work. People typically need time on Facebook Ads before they convert, especially on higher-value asks. As a result, it’s more effective to move people through the sales funnel using your ad campaigns, and if you do this correctly, you have a better chance of keeping them moving through your ads instead of getting stuck on the first one.

Once users watch your first video ad or click on it to a specific landing page, show them a new ad based on this new relationship. You can use custom audience retargeting to do this, pushing users from an introductory ad to a lead ad to conversion, or whatever system works best for you.

Budget can be tricky. If your budget is too small, you’re limiting the number of impressions you can get, and thus impacting your reach. If the budget is too big, however, there’s a chance your ad gets shown to the same people because there’s nowhere else to go.

Too big of a budget on too small of an audience can result in a quick and unexpected death for an otherwise great campaign. Because of this, it’s often good to start small, even at just $5 or $10 per day. I’ve even seen some experts putting just $1 per day into your campaigns when they’re new so you can see how they do.

In many cases, lower budgets allow you to slowly reach more people over a longer period of time without chewing up your ad spend. They also give you a chance to calibrate your campaigns if necessary as you go, giving you room to work before sinking too much ad spend into a campaign destined to fail.

Unfortunately, there’s no way around the fact that to keep your ad campaigns profitable long term, you need to keep fresh campaigns coming on a regular basis. This is a crucial part of preventing ad fatigue, because not everyone is ready to move to the next stage of the funnel the first time they see an ad at their level. They may need different messaging, or just to see it in a different format for it to click.

Split testing can help with this. Not only will it give you a lot of insight into what your audience wants to see, but you’ll be forced to create additional versions of your campaigns that automatically cut back on ad fatigue. Seeing altered messaging or different ad formats can be enough to keep your audience engaged, giving you better reach and more results.

Keep an eye on your campaigns as they’re running. If they’re seeming to stall, it’s likely time to change things up, pause them, or stop them altogether. You’ll either notice frequency climbing, or conversions/clicks falling. If you see impressions dropping off after you’ve set a frequency cap, that’s another sign. These are all indicators that something isn’t quite right with your campaign, so back to the drawing board for some new ones.

It’s easy to be excited when we see that our ad campaigns have gotten thousands of impressions, but if the same people are seeing the same campaigns over and over, it’s unlikely that the campaigns will yield what you’re putting into them.

Optimizing for reach with targeted, relevant campaigns is the way to go, and with measures in place to reduce ad fatigue, your campaigns are much more likely to be successful. While this will require more ongoing work and new campaigns to be created consistently, it’s worth the effort, and the returns you see will be much higher.

Interested in getting help for your Facebook Ad campaigns? We offer specialized, data-driven PPC services. Get in touch to learn more about what we can do for you here.

What do you think? How do you increase Facebook ad exposure without having your campaigns succumb to the dreaded ad fatigue? What strategies have worked best for you? Share your thoughts and questions in the comments below!