4 Powerful Marketing Lessons from this Season of “The Bachelor”

Given the parallels between the two, it seems only natural to pull marketing insights from the world of romance. And for that, let’s turn to the Bachelor.

The Bachelor has been taking the world by storm for 21 seasons. Most watch it solely for entertainment, but let’s see what we can learn from this season’s contestants about marketing yourself and your business.

Be Funny and Memorable

Alexis made a splash with her entrance on the Bachelor. She wore a shark costume, which she insisted was a dolphin costume. Nick (this season’s Bachelor) found it funny and kept her around. Each week she provides comic relief for Nick and the girls with her humor and her take no prisoners attitude.

‘I dolphin-ately can’t wait to talk to you more inside,’ -Alexis

Whether or not you appreciate her humor, Alexis definitely makes a strong first impression, which has helped carry her far in this season.

Getting people to remember who you are and what you’re about is also important in marketing. For example, Snickers used humor to great effect a couple of years ago during their “You’re not you when you’re hungry” campaign.

Essentially, Snickers’s PPC team used a clever algorithm to generate a list of 25,381 common misspellings of words. They then targeted these misspellings in their AdWords campaigns: 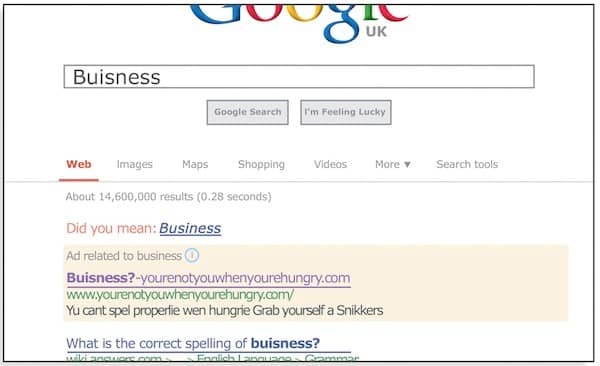 Regardless of what you were thinking of when you typed in “buisness”, this ad does a great job of making you think about Snickers.

So, whether you’re vying for potential customers or a crush’s eye, humor can be a great way to stand out from the crowd. Of course, to effectively use humor, you need to be…you know…actually funny. Here are a few tips on how to do that:

If you haven’t tried humor in your marketing, give it a shot! Given Alexis’s success on the Bachelor, a little humor can go a long way.

Astrid started off this season by trying to win Nick’s heart by showing off her foreign language skills. That could have created a intimately personal moment…if Nick had had a clue what she was saying. 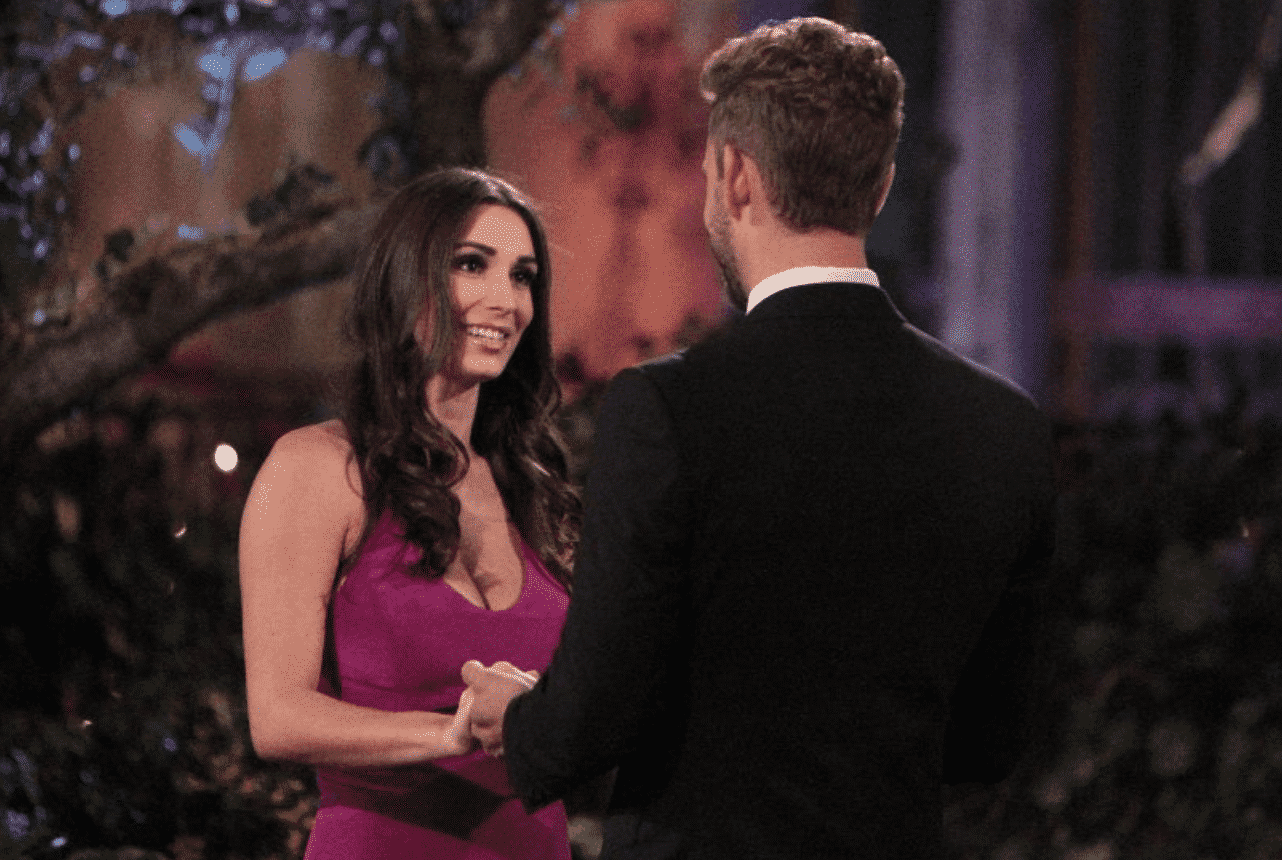 Fortunately for Astrid, her chances on the show weren’t lost in translation, but since this initial miscommunication, Astrid and Nick have been speaking English whenever they get time together.

Marketers can struggle with this same problem. Most of the time, we live and breathe our industry. We’re fluent with the lingo and we use it without missing a beat. However, just because what you’re saying makes sense to you doesn’t mean that it makes sense to everyone else.

For example, when I started learning about pay per click marketing, I thought PPC was “paperclip” marketing.

Shortly thereafter, I was introduced to the acronym CPA. I grew up in a family of accountants. The only CPA I knew was a certified public accountant, but that made no sense in marketing. I was all sorts of confused until I learned that in marketing, CPA means cost per acquisition.

Since I wanted to become a marketer, I was willing to put in the effort to learn the lingo. However, most of your potential customers aren’t going to be willing to do some research just to figure out your advertising message.

So, if you want to win someone over, you have to speak their language.

My favorite recent example of speaking a language you both understand is he following billboard a recruiting company has been using across Utah:

To me, this billboard means nothing, but I’m not their target market. To the right market, “[“hip”, “hip”]” means something—and it’s probably something humorous. As a result, MX’s target market becomes part of an inside joke, which allows them to create the sort of connection Astrid was hoping for with her Bachelor introduction.

There is no doubt what Corinne wants on the Bachelor: Nick, her nanny Raquel…and some cut cucumbers for lunch. And Corinne has no problem being very forward and open about what she wants.

This “take no prisoners” attitude certainly caught Nick’s eye, but it backfired a bit on her when she went so far as to seduce Nick wearing a trench coat with nothing underneath. Nick was into it, but didn’t want to risk his relationships with the other women, so he played it safe.

Corinne interpreted Nick’s wanting to take it slow as disinterest and cried herself to sleep.

In marketing, it can be easy to fall into the same sorts of traps. Your job depends on your ability to get people to commit, so there’s a temptation to push and push and push. However, people aren’t always ready to commit. In this situation, pushing too hard can be a real turn off.

What do you do then? Do you give up and cry yourself to sleep?

For Corinne, while she thought all was lost after Nick backed off, that didn’t turn out to be the case. In fact, Nick took time the next day to check on her and seemed fairly interested in continuing to explore the relationship.

Similarly, one bad interaction with a potential customer doesn’t mean the relationship is over. Marketing is a lot like dating—you can’t expect marriage after the first date. In most cases, you have to date your potential customers for a while before they will be ready to fully commit.

Danielle M introduced herself by bringing some homemade maple syrup—something she loved. She and Nick immediately bonded over French toast (I’m betting that on a future date they’ll have a French toast cook-off).

This intro was great because it was simultaneously quirky, flirtatious and genuine. In fact, Nick liked it so much that he invited her on the first one-on-one date. Since their date, they’ve found time to sit down and talk more to get to know each other.

Turns out, the same tactics work well in marketing, too. These days, people don’t just care about the products they buy—they want to feel connected to the business that sells them, too.

While it is harder to be quirky in a professional setting, it is not impossible if your audience is light hearted. If your ideal clients are serious and not looking for quirky, don’t try this at work.

One company that this worked well for is Poo-Pourri. They don’t try to make their product very serious because it isn’t a serious product. If you don’t know what they offer, its a before-you-go toilet spray that adds a film to water trap foul odors in the bowl while releasing a good smell into the air.

In this commercial, Poo-Pourri does a great job of being engaging, quirky and giving people a feel for their company and product. It’s an advertising strategy that has done wonders for their business.

Now, if you’re in the financing industry, being “quirky” may not be the right approach, but being real and willing to poke fun at yourself is a great way to connect with people in almost any market.

Now, there are a lot of other marketing lessons to be learned from this season of the Bachelor.

Jasmine’s intro is a great example of marketing with your end goal in mind, Taylor’s brief stint on the show made it clear that insulting your target audience isn’t a great way to win them over, Liz’s tragic experience highlights how past experiences can have an effect on the success of your current marketing efforts…and the list goes on.

In fact, you can pick almost any contestant on the show and learn something valuable about marketing from their experience. Give it a try and let me know how things work out!

By the way, if you’d like a little extra help wooing your target audience, let me know here or in the comments!

What other marketing-romancing lessons have you seen on the Bachelor? Tell me in the comments. Enjoy the show!

As the Executive Assistant, Jenny's primary focus is to help the Executive Team better lead the company with the proper financials, reporting, presentations, accountability etc. Jenny's role as an account manager, social media marketing manager, and accountant along with her recently earned MBA have allowed her to develop an understanding of the business that few others have.

As the Executive Assistant, Jenny's primary focus is to help the Executive Team better lead the company with the proper financials, reporting, presentations, accountability etc. Jenny's role as an account manager, social media marketing manager, and accountant along with her recently earned MBA have allowed her to develop an understanding of the business that few others have.