3 Things That Can SHUT DOWN Your PPC Campaign

Shh. Can you hear the sirens? (image source)

We spend a lot of time telling you about these “crimes” that you’re committing on your landing pages and AdWords accounts, but the worst that’s going to usually happen is you waste ad-spend or you have a terrible conversion rate.

What if your mistake got your campaigns shut down completely? I’ve put together a list of three things that you could forget or be doing incorrectly and face some serious consequences in your PPC Campaign.

It’s a bit harder to find an overarching rule for all of AdWords, but there are specific rules for many of the features of AdWords. I know that we don’t want leak links on our landing pages, but you have to have one!

Without it, you could possibly chug along for a while without getting noticed, but if Google finds out, it won’t be pretty for you.

What did your students do wrong? You’re a marketing professor?! (image source)

While I don’t think they actually faced legal action, they did lose a once loyal alumnus donor. Don’t mess with privacy policies.

Have you seen those crazy ads from the 50’s that are super offensive or misleading? In an age of companies being torn apart for badly timed promoted tweets, ads like this would probably be burned at the stake: 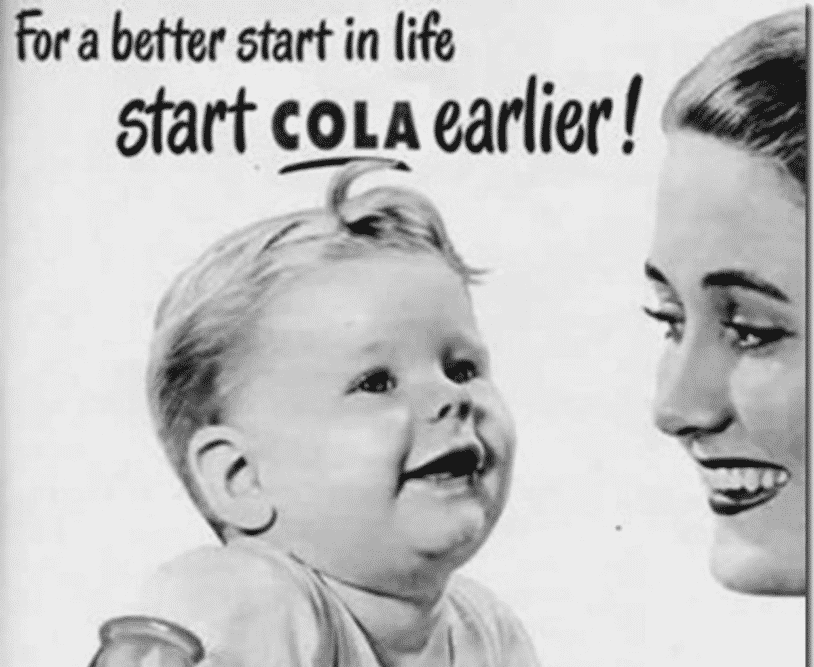 “Babies who start drinking soda during that early formative period have a much higher chance of gaining acceptance and ‘fitting in’ during those awkward pre-teen and teen years.” I totally believe that. (image source)

Well, not only will the public flog you for misleading ads, but Google AdWords won’t be too happy, either. Their policy is “Ad text must be relevant, clear, accurate, and descriptive of the products or services offered.”

They have plenty of examples on their policy page of ads that will be disapproved. The things that we’ve seen people get slapped for?

Advertising a free service, but then asking for a payment or information, or simulating an alert or notification. Remember the awesome “asian singles” ad in my last blog post? Also, you could get caught lying about your services entirely, like this Pro-choice organization that was falsely advertising abortion services.

Maybe you’re not even trying to be dishonest. You could have just forgotten to change your ad campaigns after switching your offer on your landing page. Even if it’s an accident, you could get reported by an angry consumer or disapproved by Google. Be careful.

This one seems the most obvious, right? Yeah, you all know that stealing is wrong, but sometimes we don’t even know that we’ve infringed on someone else’s property.

Did you know that you can’t mention your trademarked competitor in your ad text? Or that you can’t put Apple’s logo on your landing page, even though you fix iPhones?

Using trademarked terms mostly affect you when that company calls you out on it. If Dell sees their logo on your tech support landing page, they’ll blow the whistle and Google will shut you down, no questions asked.

So what can you do in regards to trademarks?  You can include your competitor’s name in the keywords that you’re bidding on. Here’s an example:

ReachLocal is an online marketing company, so let’s say I’ve heard about them and type “reach local” into Google. The top two results aren’t even ReachLocal! The first guy has sneakily used “Reach Local” in a sentence so that he’s gotten around the trademark restrictions.

Even if you type “ReachLocal” this guy still shows up, though his headline is different so that he’s not treading on any toes. The ad below is another competitor of ReachLocal. How are they showing up? They’re bidding on their competitor’s keywords!

AdWords is a vicious place.

What about your landing pages? It’s hard to define your services as a iPhone repair man if you can’t use any Apple terms!

The good news is, you can still use those terms, as long as you very clearly define that you are NOT associated with Apple. You can do this through disclaimers and stating that you are a “third-party” provider, fixer, etc. These companies can still demand for you to be taken down, but you’re a lot safer if you have the proper disclaimers and clarity in place.

There’s a lot more AdWords policies that you should be aware of, but these are the three that you should always be careful about. Don’t forget your privacy policies, always be clear and honest in your ads, and stay away from trademarked terms unless you know exactly what you’re doing.

Learn the rules, and live by them to have a successful and killer PPC campaign!

…but not literally killer. That’s against some bigger laws.