Why You Should Optimize for Profit Instead of CPA, CPL, ROI, or ROAS

Mo money, mo problems? Not for the profit driven marketer.

Let’s start with a quiz. Look at the following AdWords campaign results and consider which of the two advertisers is doing better: 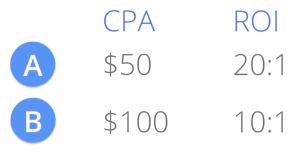 Is it advertiser A? What about advertiser B? At first glance, some would say advertiser A seems to be performing better because a 20:1 ROI is awesome and a $50 CPA is much better than $100.

Others would say B is the top performer because they’re afraid to guess since this could very well be a trick question.

So which one is it?

The correct answer is kind of tricky. The answer is: it depends.

But How? We’ll get to that shortly, but first, the answer depends because you need to be looking for a different metric.

As advertisers, it’s not enough to say “clicks are coming, so all is well.” Getting clicks is definitely awesome because it means your ads and keywords are relevant enough to the user that they want to see what you’re all about. However it’s not enough.

Similarly, saying, “we’ve got your CPA down to $50!!!!” may be awesome, but it might not be enough. To find the true winner, we don’t need to look “out of the box,” we just need to burrow deeper inside.

The metric you need to look at is profit. So let’s dig deeper into our box and add some more data to our equation:

The more data points you have, the better.

[Tweet “Be careful to not sacrifice #PPC CPA for volume, or vice versa.”]

However, let’s do the simple math.

Advertiser B is doing tons better.

Too often, advertisers are focused on the top of the box. They hit that $50 CPA and 20:1 ROI, and they are so content that they often times continue working to maintain that great result.

Come to the bottom of the box with me…any time you optimize a campaign for a better CPA, you are focused on becoming more efficient. You are refining your campaign to spend your money effectively in the right places, but you could ultimately be shrinking your campaign. 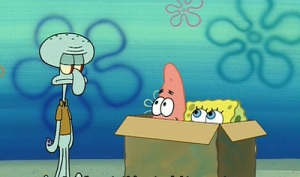 Welcome to the bottom of the box. It’s better down here isn’t it?

When you optimize for profit, you are consciously engaged in growing the campaign rather than shrinking it. It doesn’t matter if your margin per conversion is $1,000 or $250.

If you’re focused on profit, a seemingly higher CPA is ok if you’re earning more profits. After all, getting a $50 CPA instead of $100 is awesome, but getting your client or business a profit of $27,000 is much better than $9,500.

Google has done a great job of starting to focus more around this concept and understand that at the end of the day, cash flow and profit is what helps keep the lights turned on.

You can read more about Google’s way of setting a new standard for performance with AdWords here.

Evan is a giant of a man, and not just because he's around 7 feet tall. He's our Bing specialist, and also our "Bing" Awesome specialist (get it?)