What Game of Thrones Teaches About PPC Management

A little while back the fifth season of HBO’s Game of Thrones ended. I don’t know about you, I’m still hooked and a little shellshocked (but let’s avoid spoilers…)

Now that the show is on hiatus until next spring, I finally started reading the books, so I’ve got Game of Thrones on the brain. But besides that, another thing I think about a lot is…pay per click management!

It turns out, Game of Thrones offers plenty of lessons for businesses looking for a PPC agency to manage their AdWords, Bing, and other PPC platforms. Here are some quotes from the book to show you what I mean: 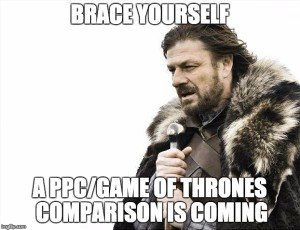 If you know anything about Game of Thrones, you know that no character is ever safe. Author George R. R. Martin and his HBO partners take great delight in shocking fans with unexpected twists, turns, and violent deaths.

PPC management isn’t quite that bad, but it’s part of an incredibly competitive digital marketing arena. Most businesses rely on a no more than a few dozen keywords to bring in the majority of clicks and conversions–keywords that competitors are bidding on as well. It’s hard to be successful if you can’t capture and convert traffic in the top ad spots.

Does this mean PPC is a lost cause? No way! The reality is, search engines are how we find things nowadays. Even when I see an interesting offline ad or billboard, the first thing I’ll often do is google the company to learn more about their industry. That means it’s incredibly valuable to have a strong search presence…but you need to do it right.

A lot of companies using PPC aren’t playing the game to win. They’re not using conversion focused landing pages, they’re not regularly A/B testing new ideas, and they’re not looking at the most effective ways to save money on their accounts. Some PPC agencies aren’t even doing that for their clients!

If you’re not doing PPC right, chances are you’re going to fail. Not sure how you’re doing? Try a PPC account audit on your Google AdWords account to get started.

2. “The common people pray for rain, healthy children, and a summer that never ends. It is no matter to them if the high lords play their game of thrones.”

On first glance, it doesn’t seem like this advice from the exile Jorah to the would-be Queen Daenerys is relevant to search marketing. But dig a little deeper and it starts to become clear.

In my time in PPC management, I’ve encountered businesses who were so focused on what they wanted to do that they forgot who matters most: the user. For example, I’ve seen companies that insist on bidding on certain “ego” keywords that data shows aren’t productive for their business. I’ve had CEOs and marketing directors choose to run a lower-performing landing page variant because it looks better than a higher performing one.

The truth is, ego has no place in a well-run PPC campaign. The beauty of PPC is that with the right conversion tracking you can learn exactly what works and what doesn’t. Don’t like your current ad copy? Test something else and let the data decide what’s best!

PPC enables and demands accountability, so be sure to take advantage of it and don’t waste your time playing games that won’t drive more conversions!

3. “Power resides where men believe it resides. No more and no less.”

One of the lessons Game of Thrones drives home again and again is that no matter how secure you think your position is, whether you’re the king, a knight, or Lord Commander of the Night’s Watch, it can all fall apart if you’re abandoned by your supporters.

So how does that relate to PPC? Well, it makes me think about establishing effective social proof!

Managing an AdWords account by itself is only half the battle–it’s just as important to look at landing pages and conversion funnels, and that’s where social proof really starts to matter. Everybody knows to include testimonials, social media links, and corporate partnerships on their website and landing pages, but it’s important to use them in ways that bolster your legitimacy in the eyes of your target users.

That means your testimonials should be specific and concrete. Your social media should be responsive and friendly. The corporate partnerships you highlight should appeal to your target customers. It’s all about establishing a relationship of trust with your web site visitors in a way that won’t come off as gimmicky, fake, or untrustworthy.

4. “Every man should lose a battle in his youth, so he does not lose a war when he is old.”

Several important characters in Game of Thrones lose battles over the course of the series, but the ones who run into the most trouble tend to be the ones who don’t get a chance to learn from their mistakes.

For example…well, I don’t want to spoil anything, but at one point the young noble Robb Stark, a little overconfident after some big military victories, makes a mistake that offends a key ally. The consequences shake up the story in a huge way, and it all could have been avoided with a little more humility and experience.

Not everything you try in your PPC marketing will work. The ability to fail fast, however, is a feature, not a bug. The question is, what happens next?

A smart marketer is always willing to test new ideas, some of which will fail. But he or she should also carefully record and analyze results to learn why something failed, and use that knowledge to improve future tests.

The important thing is not being right every time, it’s in knowing how to get better results over time. That’s why it’s important to work with someone who’s more than just an AdWords account manager–you want someone capable of thinking strategically.

If you’re a marketer and a Game of Thrones fan, hopefully you’ve seen how the two go together surprisingly well! Well, maybe not always–I guess some people complain about backstabbing at work, but at least it’s probably not literal. Let me know in the comments what PPC lessons you’ve learned, from Game of Thrones or otherwise.

Meanwhile, if you’re not sure that your current PPC management solution is working out, we’re happy to provide a free audit of your accounts and strategy to help you get more from your marketing budget.