If you’re anything like me, it probably bugs you when you follow someone on Twitter and they immediately respond: “Thanks for the follow! Let’s connect on Facebook (link), LinkedIn (link), and my email newsletter (link)! Can’t wait to get to know you!” My first thought is always “isn’t it enough that I just followed you on one platform?”

And then my second thought is almost ways, inevitably, “Should I use automated Twitter messages, too?”

So many people use them, after all, including marketing gurus and business experts. As someone who works in marketing, it made me wonder, did I look like an amateur for not having one? Was I potentially losing clients because my outreach was falling flat?

I set out to discover whether or not using automated Twitter messages. Here’s what I discovered:

There are some advantages to automated Twitter messages, especially in the rare cases that they’re executed well (most are not).

First, an automated Twitter message can grab your new follower’s attention and potentially start a conversation. Using an automated message that’s generic but engaging, like “Thanks for the follow! I’d love to learn more about what you do” can jumpstart discussion between you and the new follower.

It also works a lot like the sort of email welcome sequence you might use for a new blog subscriber. It tells them a little about you and your business and lets them know you’re excited to be connected with them.

Automated Twitter messages seem like a good idea, but let’s face facts, in real life…they’re annoying. I have actually unfollowed people just because I hated their auto-response so much!

Why are automated Twitter messages so annoying? Well, there are a few reasons:

Maybe back when they first came out, automated messages worked, but these days, almost everyone on Twitter knows what an automated message looks like, so they know that you aren’t personally greeting them to your profile.

There isn’t much point in making a point to greet everyone if they know it’s just an automated response, is there? 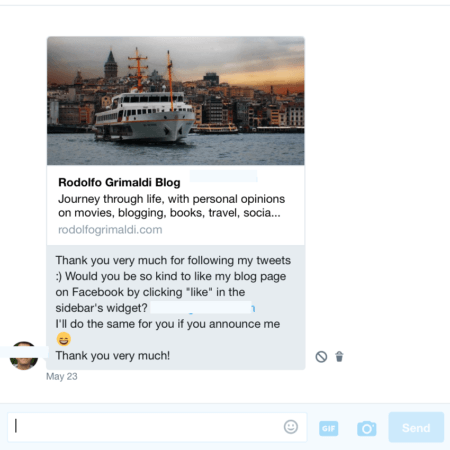 To make matters worse, in many cases, the content in automated messages are also unnecessary. If users are following you, there’s a good chance that if they’re interested, they’ve already checked out your site and your free eBook. If they haven’t, an automated message almost certainly won’t change their mind and a message asking them to do something will almost guarantee that they won’t do it.

Most of the automated messages that I see come across way too aggressive. They’re all focused on self-promotion.

Many messages will share links to four different social profiles, trying to rack up followers and fans on each. It’s off-putting, like the person at the networking event who just walks up and hands people their cards as they’re shaking hands with them.

Just like we toss out junk mail and don’t always open promotional emails with subjects that aren’t highly targeted, users get no real value out of most automated messages.

As a platform, Twitter is designed to broadcast news and ideas and give people a place to talk. Actual, real-life engagement is always a good thing, but there are enough automated systems out there that we don’t need them taking over Twitter’s DMs, too.

In my research, the general consensus from users is that the messages are frustrating and feel like spam. That’s not exactly the sort of first impression you want to make with users. 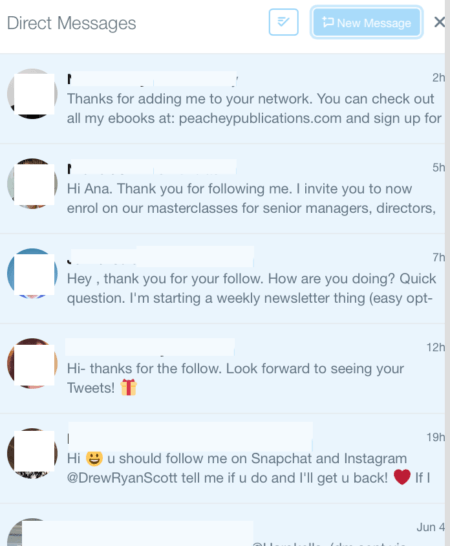 Please don’t be the reason my DM box looks like this.

The whole point of Twitter is to connect with people, so sending them direct messages that essentially say, “I don’t want a real relationship with you” isn’t likely to make people want to stick around.

On the other hand, good Twitter etiquette is focused on making real connections. You follow people back and engage with their content. Engaging in a genuine, authentic, and non-automated way is recognized and appreciated.

You can always tweet or DM message someone directly to thank them for following you, but these messages will be specific to the person and relevant to them and their interests. That’s not something you can do with an automated message.

And if that is overwhelming and just not possible? Just try to follow them back, and like a few of their posts when you get the chance.

All that being said, if you feel like the pros of automated Twitter messages outweigh the cons, there are a few tactics you can use to have a better response and reaction to them.

Don’t Use Software that Leaves a Signature

Nothing says “this is spam” quite like a direct message that ends with “dm sent via unfollowspy.” 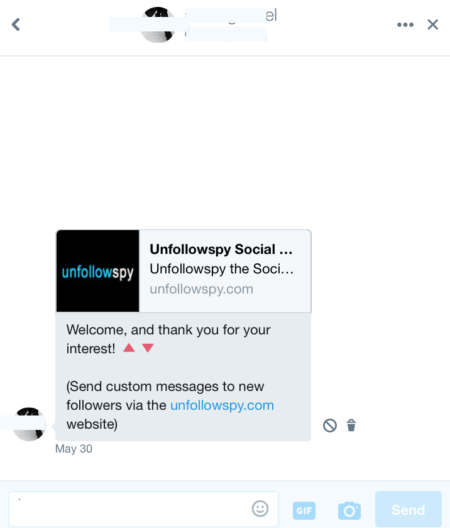 I also see plenty of people whose accounts send DMs requiring users to “validate” their follow. I’m going to go ahead and recommend against, too these. While a clever user can spot even the best automated DMs, you don’t want to make it easy for them by including red flags.

Apologize for the Automated Message

People appreciate honesty and they get that you don’t always have time to personally reach out to everyone. So, while they don’t want to see the tagline of the automation software, acknowledging that “yes, this is an automated message and those suck but it’s the best way to say hi” can win you some points.

I’ve seen DMs that make this mass message seem more personal by acknowledging the automation, including the example below, which tells users that if they respond, the owner of the profile will write back personally. 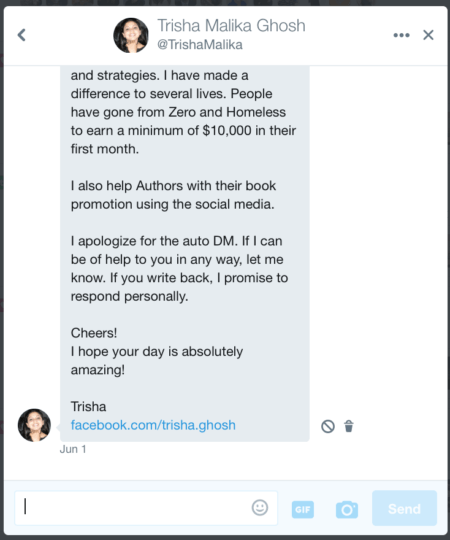 This is a much better way to use automated DMs. It doesn’t try to masquerade as an actual personal response, which actually ends up making it feel more genuine (ironically enough).

Know What You Want

The goal of a DM should not be to thank your new follower for signing up to read your tweets—there’s no real point to that. Instead, create automated DMs that spark conversation.

Ask questions centered around the user and not you. DMs like “Tell me what you do!” are probably your best bet. 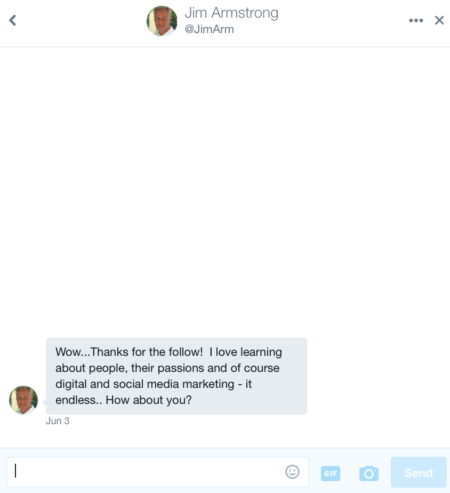 Remember, social media is a lot like real life. People want to talk about themselves. If you’re willing to listen, you’ll make a lot more friends than you will by talking at people.

From everything that I’ve read, and based on personal experience, automated Twitter messages typically don’t work in favor of the sender. While there are a few exceptions and some individuals are able to pull it off, I’d typically advise against them.

Users won’t miss them if you don’t have them, but you risk annoying them if you do. Instead, put your effort into engaging with your new followers as authentically as possible. That will grab their attention in a good way, and help you start to build strong relationships.

What do you think? Do you disagree with me? What are some of the best and worst automated Twitter messages you’ve seen? Let us know in the comments below!